Sorry for the radio silence from me of late - things have been rather busy! Here's a selection of a few pictures which I've saved up over the past month...

I quite liked this shot of Naomi having a seat on one of her more cube-shaped toys, combined with having a bit of a dance with her dolly (who is still very well cared for) 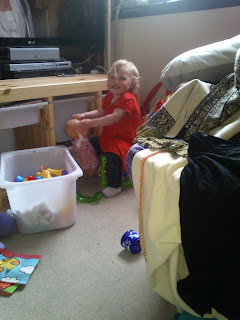 I thought these two shots were classic "child eating" material. Just a suitable amount of food on her face - though really she's getting pretty good at eating now. She's getting the hang of a fork, although we quite often have dropped food being picked up with fingers and put back on the fork for consumption. Very cute. 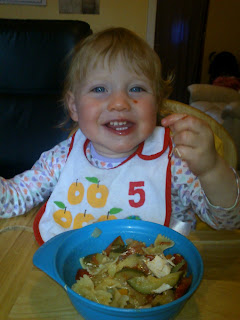 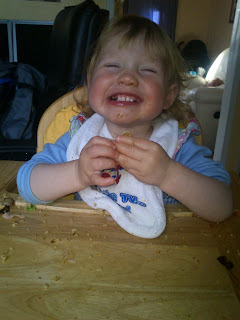 Here's dolly being looked after, being changed into a plastic fridge magnet (I got this printed up as a YFC promo for our car at some point a few years ago). I'm sure it's quite comfortable. On a similar vein, Dolly received a dunk in the bath last night (complete with clothes - needless to say it caught me by surprise). I asked Naomi if she'd been needing a clean, to which I got a definite nod! Naomi then helped me dry Dolly in a towel. 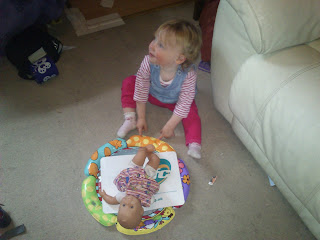 Ever the independent girl, Naomi can now climb unaided into her high chair and buggy. The operation looks quite precarious but she's quite good at it and sits down nicely once done, usually looking very pleased with herself. Apparently the act of climbing up/down is the best part; after meals she often wants down, only to climb back in again. 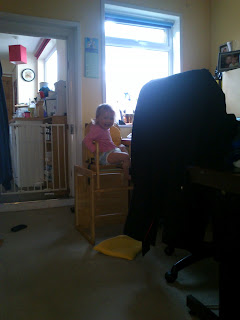 A little update on work. Loughborough University is the preparation camp for the UK and part of the Japanese Olympic teams. Consequently there's been a bit of a lock-down - with massive security barriers appearing all over the place - like this one, which blocks the road access next to my building: 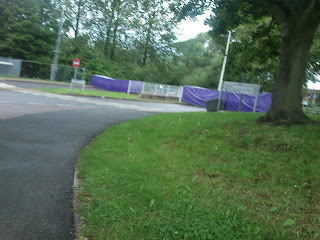 (it's less impressive than it looks - mesh boxes filled with bags of soil - though elsewhere there's proper steel and concrete barriers in place - and they all do the job) I'm a little surprised I've not been searched yet! Perhaps "the look" I seem to have at airports doesn't carry over to my work day.

There's also a bit of a shuffle happening in my office. In contrast to my old department at RGU, there's a much larger research budget here, built up over several decades. There's something like 40 research staff - about 10 times as many! Though I see RGU's School of Computing is expanding research funding all the time, and well deserved that is too. Anyway, there has been a bit of an influx and we have some more people coming in here at LU, so on Tuesday I was told to work away from my desk while furniture was moved. I returned on Wednesday to find my desk hidden by a big pile of boxes! 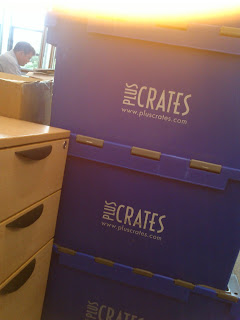 Hopefully these will be gone soon - though I'm somewhat glad I'm out of the office for most of next month (holidays and a conference) - so there should be plenty of time for my "castle" to disappear again.

It's also been a bit wet here today - as it has been across more of the UK - and I can see some pretty impressive lightning from my office. Our department's lab building (home of a massive ram) is flooded. Of course, this is where all the computer servers and our experiment running machines are kept, and currently I can't access them over the network. Hopefully they're all okay! Today is an exciting day, as NESYFC is launching its cage project - this has been in the making since a year before we left Aberdeen and it's good to see it really happening - though I suspect it may be a bit wet for those who venture out to see it tonight. Still - long term I'm sure it'll be a great resource and more importantly, will open avenues for reaching out to many young people.

Finally a short clip of Naomi trying to whistle. She's gone off this again now, but a couple of weeks ago she noticed me doing it, and gave it a shot. She even managed to make a bit of a sound a few times, but unfortunately I didn't manage to capture that - so all you see is her giving it a quick go (silently) and me whistling out of shot (and tune).