We got a really nice video of Miriam playing yesterday which is well worth sharing. She's growing up really fast at the moment, it seems there are new words every day, she's getting better at communicating and has developed a wonderful personality. She's fascinated by her big sister, loves to copy what Mummy, Daddy and Naomi are doing, and one of the best things is that she likes to take care of us. So she gets most insistent when we get a snack or drink for her that we get one for Naomi too; if she sees us tidying she tries to help; and if she sees that someone is sad she gives them a hug.

Here she is making some tea for everyone. It also starts off with her "definite nodding" which she's really got the hang of now. (plus if you listen carefully you can hear her word for "Naomi", which is still quite similar to "Mummy")

I am already more than 21 weeks pregnant! It has felt like a long old time and has flown by at the same time.  Today I had my 20 week scan.  All is well, growing well and with all the right bits in the right places.  We don't know the gender and won't until baby is born.  We thought you might like to see the picture we got to take home with us. 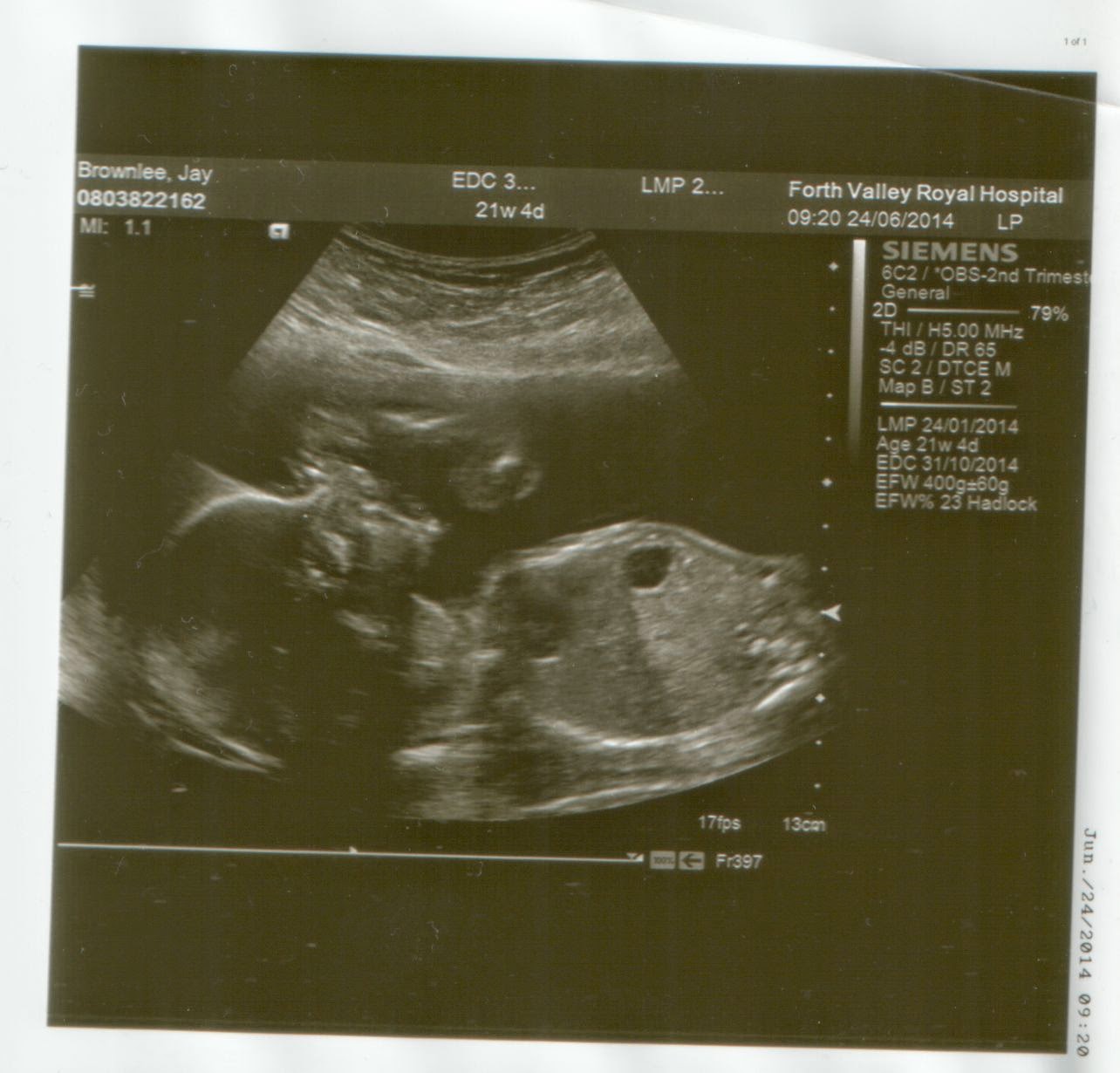 Head on the left, facing up the way, if you need directions!
Posted by Jay at 10:59 No comments:

Email ThisBlogThis!Share to TwitterShare to FacebookShare to Pinterest
Labels: Baby, Goings on, pregnancy

This story is really from a couple of weeks ago: many of you know it now but it felt worth recording. I've "humorously" added drama by using the style of a film noir narrator.

8am Tuesday. I've just come out of the shower.  Naomi has been having a lie in,  something that occurs once a week or so. There is a shout from her room and she comes hobbling out. I figure she's bumped her leg on the bed in the dark. I help her to the toilet and when I put her on the floor she falls and needs carried downstairs.

9am Toosday. It seems serious. Naomi is *very* sad.

10am. Naomi is lying on the sofa watching TV, still unable to walk.

11am. It's gymnastics day. Naomi really likes this.  So she asks to go and Jay gives it a try. After 5 mins the people running it come for Jay: Naomi can't even stand up to take part.

11:30am. A visit to the minor injuries clinic is in order, but no dice. One for the hospital they say. Very sad, they return home.

Wednesday. AM. It's all the same. Clouds of darkness consume the household.

Wednesday. PM. Still no nursery. Even the possibility of missing her best friend isn't enough to convince her to go.

Thursday. Go to hospital for an x-ray. Nothing. An appointment is arranged for Monday in case it's still the same.

Friday. AM. Toddler group has cake. Naomi likes cake. Cake is at other end of room. Naomi walks to cake and eats it. Injury resumes. We feel like schmucks, but what to do?

Friday. PM. She's managing to hobble or hop most places. We grow concerned that whatever was wrong is now gone and that it's psychological. This may be hard to shift, and all the while, the leg isn't getting used and it'll be getting weaker.

Friday. PM. In car to grandparents house. We agree on a carrot approach. If Naomi can try to walk, and succeeds, we'll take her to SOFT PLAY. Besides, maybe having her cousins around will help her.

Saturday. Despite children to play with and the carrot, Naomi continues hopping. This is bad.

Saturday. PM. Three cars full of Brownlees arrive at resaurant and walk towards the place. I tell Naomi that I won't carry her until she tries to walk. She does, and succeeds. "I CAN WALK" she says.

Sunday. It's like nothing happened, though her leg is obviously a bit weak. Go figure.

So what happened? Maybe she had a cramp or something. Maybe it was an injury sustained while bootlegging. Maybe she was playing us for suckers (I doubt it, she looked in real pain). Maybe (likely) something else.

Thanks to everyone for bearing with us.

Monday, week following. We went to soft play.
Posted by oldchap at 21:08 No comments:

A while back Naomi was given a sunflower to plant at nursery. Since then it has been joined by a couple of others from various groups ( and Miriam has had a couple too) but the original has kept going strong, along with the many vegetables we planted in the Spring.  It's just started to flower so here is Naomi bring pleased with the result of her efforts! 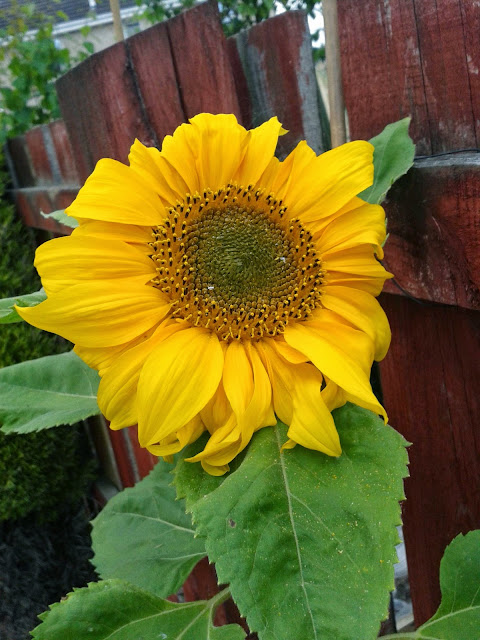 Email ThisBlogThis!Share to TwitterShare to FacebookShare to Pinterest
Labels: Goings on, Naomi, Nursery, outside

Naomi has a button jar, basically it is for rewarding her in a similar way to a sticker chart but with fewer stickers getting stuck EVERYWHERE! 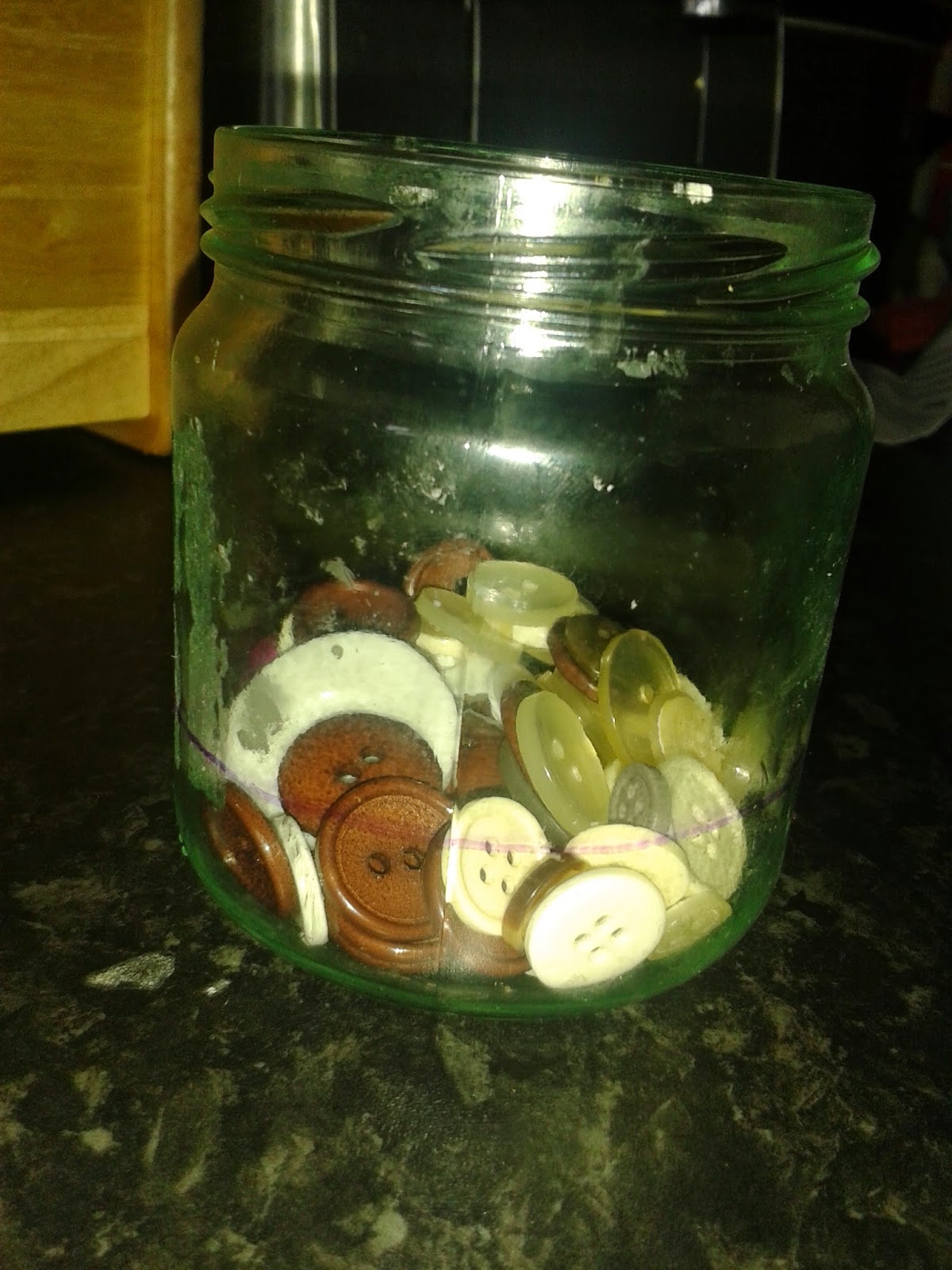 I couldn't find a small enough jar so there is a line on this one that she needs to get up to (you can just about see it here).  The basic principle is that she gets a button for being "good", so she gets one for getting dressed nicely and without fuss, or for eating her dinner without using her hands and making a mess or for going to the toilet on her own (a current "issue).  She also gets them for sharing nicely with her sister or for helping me around the house without needing to be coerced!

When her button jar is full she gets a treat.  We tend to make it a slightly bigger thing, after all she has to earn a lot of buttons first!  Sometimes I take her to soft play or sometimes we let her choose a parent to to take her to a cafe on her own for some one on one time (and a cake and some juice, of course!)

Her treat this time was a little different, we had bought for her some Peppa Pig characters to go in her Peppa Pig house because we were sad that having been handed down it didn't have a Peppa Pig!! So this time she got her figures.  Here she is enjoying her haul (we asked her what she thought she was going to get and she guessed a biscuit, so she was very happy!!) 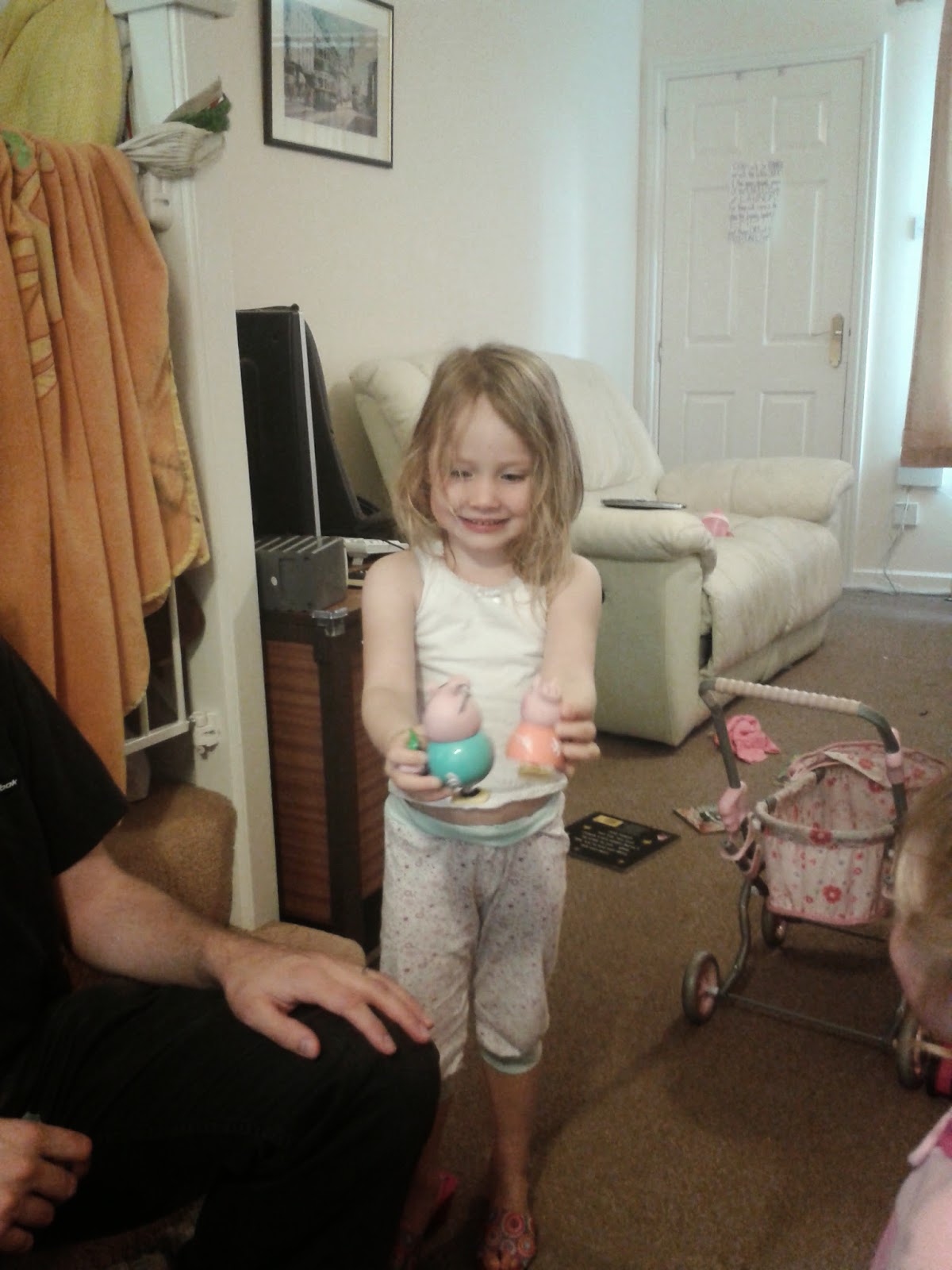 here she is enjoying it in my first attempt at a photo, she had a nicer smile here, not that you'd know! 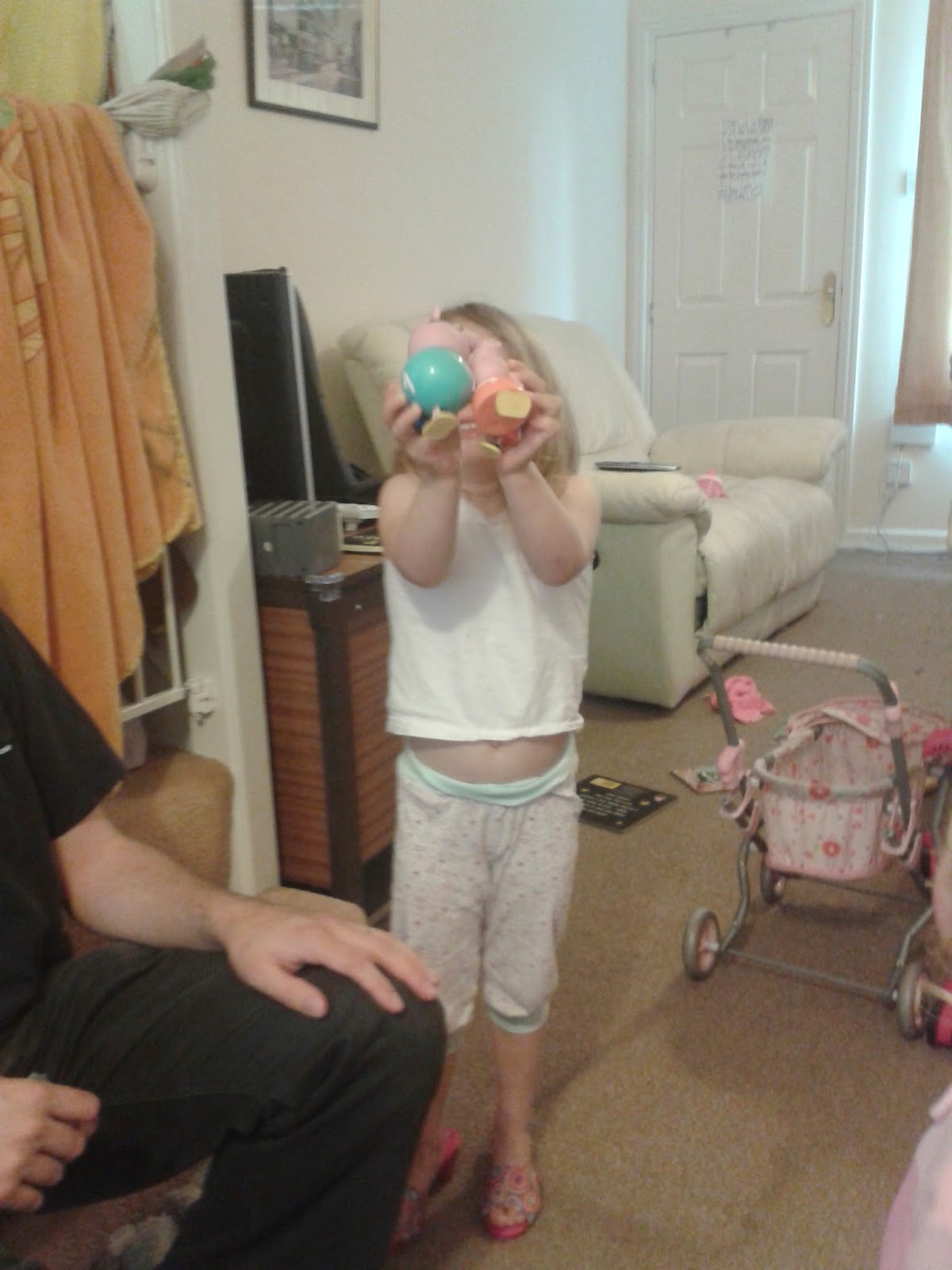 The best bit, was however getting to play with it all in situ (you can see from these photos that Naomi spends most of her life wearing plastic high heeled shoes, or princess shoes, as she calls them!) 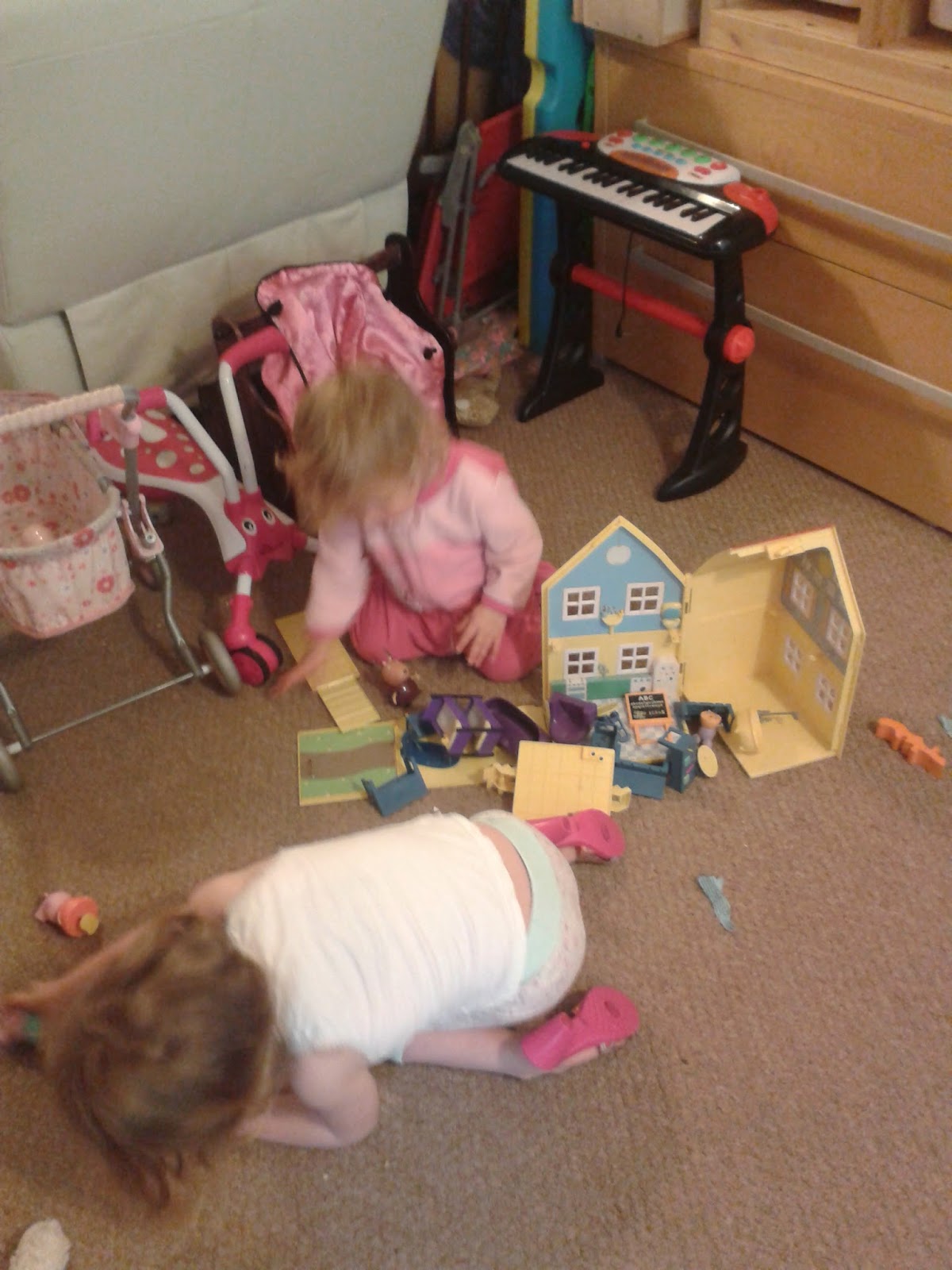 And a final wee photo for you, Naomi enjoyed setting up this scene where Peppa and George (the children) are sleeping in bed and Mummy and Daddy Pig are downstairs watching telly!! 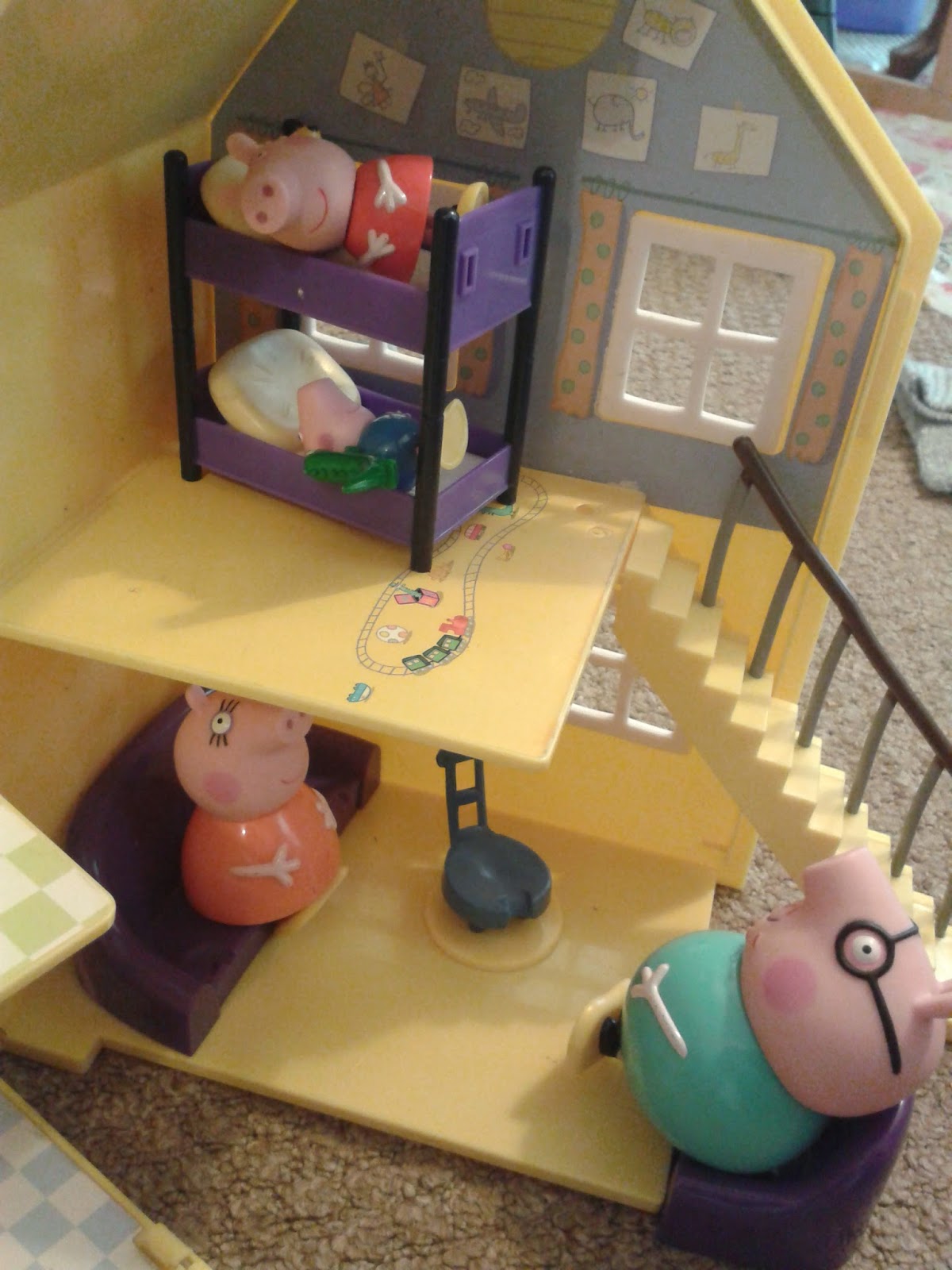 "Be excellent to each other, and party on dudes" - Bill and Ted, possibly philosophising on the best way to share an office with others.

I've been somewhat well-off for a mere researcher over the past few months, having to share a good-sized room with only one other person (in many universities it's common for even fairly senior academics to share an open plan office: Stirling is quite generous in this respect). It helps that I was sharing with the highly respectable Michael, with whom I got on very well.

However, my research group has been growing rapidly over the last year. So the department (well, division, technically) has a bit of a space problem. In order to create some more seminar space, some PhD students and a prof have been moved so their rooms can be knocked in to one. The three (and possibly a fourth) students have been put in to my old room, and Michael and I now join the other research assistants in the group in Room 4B69 (hence the Bill & Ted reference above). After 101 and 99 I am now on my third room at Stirling in a year. I now technically share with 6 other people (all talented and generally quite nice), although thanks to home working and travel it's unusual for more than half of them to be in at any one time, so it's pretty peaceful anyway. Ignoring room 99 it's also still the smallest office (in terms of people) I've ever been in. I also won the coin toss for the better seat of the remaining two so I have that to be grateful for!

Email ThisBlogThis!Share to TwitterShare to FacebookShare to Pinterest
Labels: work

It's a couple of weeks now since we headed North for a weekend with my parents.  My Dad recently turned 70 and it was just the occasion for a family get together.  My brother,  sisters and all their partners and offspring managed to come. It was a really special day and one of the things I really like is how close our family are. Needless to say the girls really enjoyed being around so many people, especially their cousins.

It was also great for us all to remind my Dad how loved he is. He's a man that's grounded in God, and a great father, with a patient and relaxed nature that is incomparable. He has just the right priorities: God first, family next and all people next. Work and money follow simply as means to do the right thing. I'd like to think that I stick with the same principles, and if I can get to 70 having brought up my children half as well, I'll consider myself well blessed. So - to Dad, thanks for being you. :)

Time for a quick round of pictures...