Some pre-Christmas pictures we've been saving up for you... 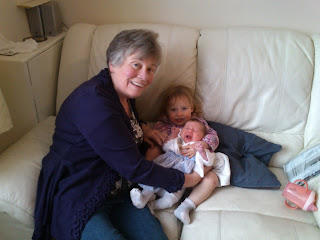 Poor Miriam, you come second time round and your parents don't update the world nearly so often about how you are getting on because they spend all their time running around after your big sister!  That said, here are some updates for you.

On December 6th Miriam weighed 9lb 15oz which is good weight gain, not to little, not too much.  In fact she is almost exactly average being on the 50th percentile when plotted on a graph of babies her age.

Miriam is not a terrible sleeper but she isn't fantastic either, her main issue is that she isn't a fan of her Moses basket but we think this might be related to some reflux issues she is having, we are starting to try and resolve those now so hopefully she'll be sleeping better/longer (at night) soon.

As her sister did at this age, Miriam loves being out in the buggy and loves our almost daily trips to some toddler group or other or just a trip to Tesco, I am incredibly grateful for this as Naomi and I go to quite a few things.  Miriam also seems to think the car isn't a terrible place to be, we are all grateful for this as it is now only three days till we travel back North for Christmas!!

Miriam is learning to enjoy some toys as well, here is Sandy shaking a rattle for her, seeing as she has not yet found her hands she is unable to do it herself, just yet!  You will see that she breaks into a smile during this (and if you have the sound on you will realise that Sandy and I like to watch Star Trek on a Saturday afternoon, don't judge us!!)

Hoping to see some of you while we are up over the next couple of weeks but keep reading for more updates (hopefully) coming soon!!
Posted by Jay at 13:46 No comments:

A bit of fun for a Thursday afternoon...

A few months back (before we moved) we were given a toddler bed for Naomi, for the time when the cot was no longer able to accommodate her. Since moving, this has been set up in her room, partly as a means of storage, but also to help her get used to the idea. Occasionally, it's been mentioned to her that this will one day be her bed.

Over the past few weeks it's been getting a bit dodgy having her in the cot. On days when she's not in the mood for sleep (usually this happens at nap time) she's been getting very close to climbing over the top of the cot; with a hard floor this presents some risk of injury! We've held off moving her into the big girl bed until Miriam had been around for a bit, so there wasn't too much disruption in one go. Last night though, she started pointing at the bed and was quite upset when she got put into the cot. Seizing on this as an opportunity for a stress-free transition, today we got the necessary stair gate to prevent escape from the room onto our landing, and tonight Naomi made the move into big girl territory. 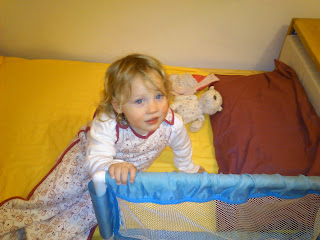 Leaving her room, I looked at her lying quite happily in the new bed, and at her empty cot. For the first time, I felt just a bit like she is growing up too fast, and was a bit sad :(

Completely unrelated, today is the first day of December, and Naomi's very much enjoying her advent train of chocolatey goodness.