Today is the 28th of October 2011, Naomi is 39 weeks and 5 days old today, this is the gestation she was when she was born, or put more simply, she has been out of me for as long as she was in!

We can now say with some certainty that her eyes are blue and her hair is blonde with a hint of what might be a wave, she looks a lot like her Daddy.  I can't tell you how much she weighs as it is too long since she was measured, but she maintains the 25th percentile and is beautifully in proportion, although even now at 9 months, she is wearing a lot of 3-6 month clothes and even some 0-3!  That said, she is definitely losing her baby look now and beginning to look more like a little girl.

She can now crawl with great proficiency and can cruise round the furniture without too much effort.  She is desperate to stand up and every so often lets go of stuff to give it a go, so far not with much success though.  She loves to climb and explore and is into everything, she NEVER stops!

Food is certainly not an inconvenience to her, I guess she is like her Mummy.  Her favourites continue to be fish and brocolli, although she is quite partial to yoghurt and the odd banana too! 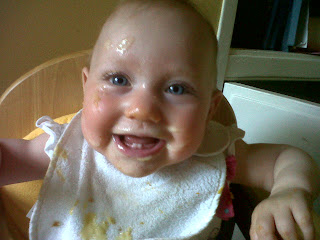 She now has six teeth which help with chewing too, two on the bottom and four on the top.  We assume they will even out at some point so she is less "top-heavy"!

Naomi loves things with music, she loves to listen to Daddy play the guitar or just a toy play a song.  At church she loves when we have music and sing, she even has a little dance and a wiggle along with what she hears!

Her favourite thing to do in a day is just to be outside, out for a walk, going to the park or just playing in the garden, it is all good fun for Naomi 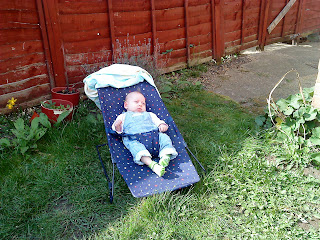 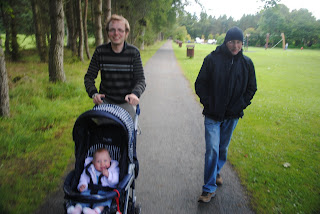 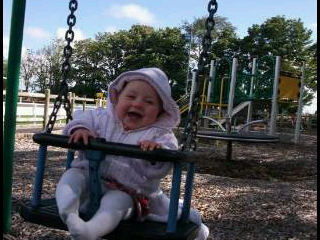 Naomi is definitely an independent kind of girl, when we go to baby groups and the likes she doesn't so much as look back when she goes off to play with toys.  Although, she's still very keen on milk and so I she would be sad if I left her forever!  She is very clear on her likes and dislikes and will make it known if she is unhappy.

People often comment on how smiley Naomi is, and it's true.  She is often smiling and rarely crying, though she does have an incredibly loud cry when she chooses to use it, as if she only has on and off switches and hasn't yet discovered the volume control!

Naomi can now sleeps through the night and normally does, though day time napping is not a favourite activity and never has been, so days where Daddy is at work can be long for Mummy!

Talking extends, so far, to babbling noises, though we are almost convinced that her Mummy noise is actually Mummy.  It is clear there are certain words she does understand though, Mummy, Daddy and Milk being definitely understood things!

Our baby girl is amazing, I am very excited to see how much more changes in the next 39 weeks and 5 days!
Posted by Jay at 10:00