I have deliberated over the sharing of this, but I am so proud of Naomi I have decided a bit of bragging about her is in order.

Friday last week was Children in Need day and Naomi's school did various things to raise money. Naomi went to school in her pyjamas and bought some pudsey ears. Unbeknownst to me, there was a colouring competition on the day and Naomi (who is incredibly good at colouring) won the competition, quite impressive when you consider the *whole* school was involved.  She won a big tub of Heroes chocolates and was excited to show me when she came out. (Although the camera couldn't capture this amongst the distraction of being at a friend's house.)

She was very good at sharing some with her friends and the we took the rest home. 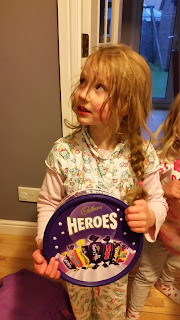 Over the weekend I had asked if she shared them with her class, she was sad to tell me there hadn't been time and so she hadn't been able to, although she had wanted to. I asked if she would like to take some to school to share on Monday but made it clear she didn't have to.

She carefully counted out one for each of her class mates but she wanted to do two each, I helped her count out another but showed her how few this left for her but she was adamant that she wanted her friends to be happy and not to be left out.  By the time she had them counted she only had about five left for herself (having eaten a few before) but she was really happy to do it. 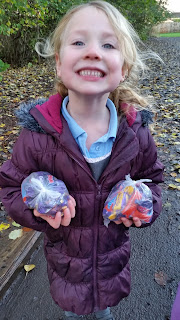 Really proud of how responsible she was with her prize, letting Miriam have some, making sure the one she chose for Lydia was suitable for a baby and sharing such a large proportion with her class. She's a good wee kid. Well done Naomi!
Posted by Jay at 16:02