Aside from being in the USA, over the past few months I've had quite a bit of travelling for work. All very good stuff but I do miss everyone while I'm away....

I mentioned before that I was participating in the Scottish Crucible. This is a scheme for new researchers in Scotland (I still count as "new" for this purpose!): it's all about building networks between different academic disciplines, and what's called impact (engaging with industry, government and public so that the research makes a more immediate difference). The course ran over three two-day blocks hosted by different universities, the first being in Edinburgh in April, the second in St Andrews in May and the third at Strathclyde in June (apparently RGU hosted one last year, so I missed out on that!)

At the end of the block we had a chance to form small groups to pitch for funding to cover a small research project. It had to be inter-disciplinary and spread around Scotland, and I found myself in a group with two psychologists from Edinburgh and an audio artist from Aberdeen that seemed to fit the bill. We were invited to an evening at the Royal Society of Edinburgh last month, where the groups winning funding were announced, and to my surprise ours was one of the successful ones! You can see me accepting the award here.
It should be a lot of fun and produce some interesting results. The funding is a few thousand, which will pay for the labour of a couple of students, and visits to Aberdeen and Edinburgh as the project runs next year. It's titled "Crowd-sourcing the aural identities of places by evolutionary optimisation": it will be looking at developing a distributed platform to use evolutionary algorithms to explore the sounds and collective memories associated with geographic locations. (an explanation in plain English will be forthcoming.)

I also went on a visit to Sheffield. You might remember that we (at work) managed to get a larger grant on optimising taxiing aircraft that will fund me for the next couple of years. This time we had a meeting to kick things off. Despite the project not starting for me until 1 January, the others involved started on 1 July, so inevitably I ended up putting together the project website. You can find out more here. The part of Sheffield we stayed in was quite pretty looking: 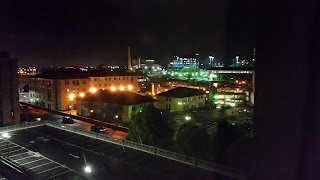 I also went to two conferences, a bit closer to home. The first was UKCI (UK workshop on Computational Intelligence) in Lancaster, where one of the students I'm co-supervising was giving a paper. It was also a chance to catch up with my former office-mate Michael, as he's now a lecturer at Lancaster University. It really is quite a pretty campus, and reminded me a bit of Loughborough... 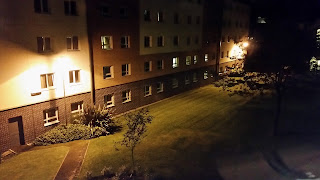 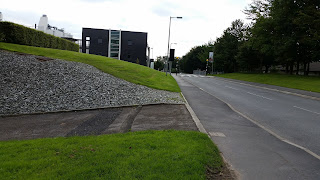 Many of you will know that during our frequent trips up and down the M6 to Loughborough, I always expected Lancaster University to appear on the opposite side of the road to that which it was on. This remains an issue - the motorway is in the wrong place! 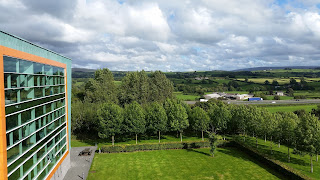 The last trip was a couple of weeks ago to PPSN (Parallel Problem Solving from Nature) in Edinburgh. I've heard for many years that this is a really good conference: small scale (150ish people), posters rather than presentations so you get a good chance to talk with the presenters, and a nice mixture of people. It really lived up to the expectations! I commuted to Edinburgh the first couple of days, then stayed overnight for the last part.
some of you might also know that when I go to a conference, I get an umbrella. So this summer I have three. Unfortunately Denver Broncos branded umbrellas were over $30, so I got a plain black one - and plain black was all that was on offer in Lancaster too. At least it was - would you believe - quite easy to get a tartan one in Edinburgh! 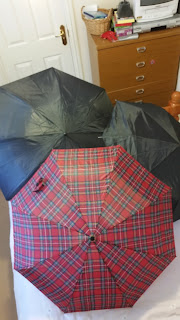