I'm having this peculiar feeling. I'd want to say it's some kind of satisfaction or something, but I'm wary of being too pleased with myself. Suffice to say I'm happy! Last week I was given an introduction to the university's library services, and part of it was a tour of the search engines available for following up references and academic texts. I'm reasonably familiar with this stuff but it's been a couple of years since I had proper access to such things, and egotistical though it may be I immediately did what everyone does when presented with a search engine and had a look for myself. I know what publications I've written (more or less), but the nice bit for me was seeing that several of them have now been referenced by other researchers. It's way cool to think that my work is having an impact on others!

On Friday I was at a training course for both RAs (that's research staff like me) and PhD students. It was telling us what one could expect after getting a job as a lecturer, as well as how to go about applying for positions and what experience is needed. All very useful stuff for my long-term plan. I found myself at a table of all students; I felt a little guilty telling them I'm done with the thesis writing etc which they've all still got to go through. This is odd as it was the complete opposite of the way I've been of late; I've been rather defensive over being not a student. I don't insist on being called "Doc" or anything - this is just good sense in case I ever end up inventing time travel and need to stay hidden from the guys who supplied my plutonium. I do though find myself making it quite clear that I'm an RA and already had a PhD - I'm sure it's quite insufferable.

It has also been quite fun starting to provide input into student projects. It looks like a lowly computer scientist is highly sought after in this department :)

On a vaguely related theme, a student came up to me the other day to talk about something, but soon after arriving had to shoot off for Prayers, which as it happens seem to take place in a communal area not far from my desk. I remarked to Jay later on that I've got a lot of respect for the discipline that Muslims have for regular prayer; there is of course a careful line to tread between spiritual discipline and it becoming "just time to do it" but I wonder if it's something that Christians can learn from.

This is turning in to a longish post so I'll leave talking about our delightful trip to the BBC at the weekend until later. Suffice to say our proximity to London has some major perks :)

Finally, this is in the lift in my building: 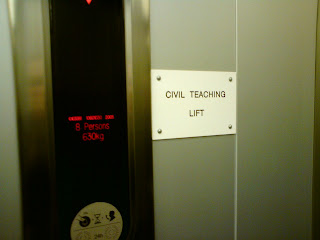 The notion that a lift could be much other than civil entertains me - perhaps one day it will cease being civil and I'll be presented with this when I push the "1" button? 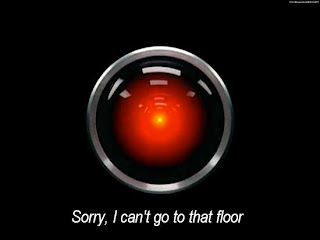