Once again I've been travelling.

A couple of weeks ago I was in Glasgow for a workshop connected with my research project. The purpose was showing people out with the project what we've been doing to get some feedback. Slightly nerve-wracking on my part, I was the only rep from the university for the day we did the demo. It all seemed to go okay though. This was the first time we'd shown our research to outsiders and the feedback was reasonably good, quite an encouragement :-)

As part of it I got to stay in a slightly wacky hotel, the citizen m. I've never had a remote control for the colours of room lights before! 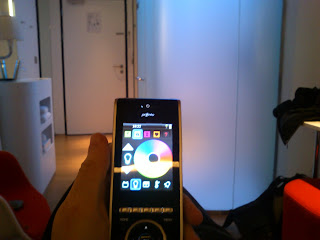 It also just felt really good to be in Scotland again.

The following week I was in Aberdeen - RGU flew me up to give a talk on my research. That was pretty fun too, got some good comments and suggestions, and I got to fly on one of those tiny planes that had a great time landing on the day of great winds. I was going to put the slides online, but I've just looked through them and they don't really mean much without me talking.

In other exciting news, a journal paper I've been working on for over a year has nearly been accepted! Journal papers are where it's at for computing academics (whatever 'it' is), so this is a fairly big deal as it'll be my first one. I have some minor tweaks to do to it before it's acceptable, but it's finally looking like it might just be accepted.

Now of course we're back in Scotland again, this time for holidays. More on that to follow...
Posted by oldchap at 14:25