Yes - I've been in the US for the past week or so. We're now back in Scotland, but before I do any posts on that, here's one that's been sitting half-written for a while...

Our house in Loughborough is just off Great Central Road, named after the Great Central Railway, which was the last mainline railway built in Britain (around the end of the 1800s) until the high speed stuff a few years ago. Those who know me particularly well know that I've a bit of an interest in such things, mainly to do with the engineering and layout of routes, bridges, stations and so on. The GCR is interesting because the vision for it was as a high speed line, to run from Manchester to a possible channel tunnel, so it was quite ahead of its time. The station in Loughborough was about 200 yards from our house, and much of line was closed in the 1960s (deemed to be inefficient as it duplicated a similar route from London to the midlands).

The Leicester to Nottingham part is preserved today as two seperate steam railways. A few weeks ago, the GCR (Loughborough to Leicester) was running a family fun day with various activities for children, so Jay treated me to a day there, and we all went for a bit of a trip. There's a few stations on the way to Leicester, and there was something to do at each.

The first train of the day was a steam one, choo choo! Here's Naomi freshly in her seat on the train, peering out at the platform... 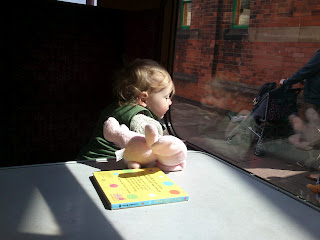 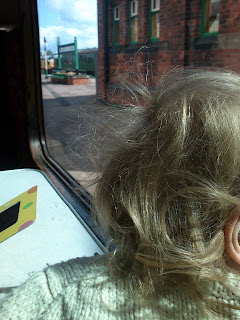 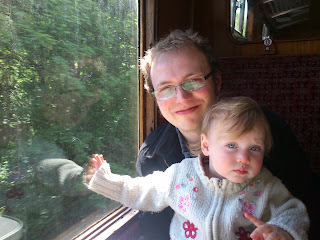 Here we are at Leicester, just having got off the train... 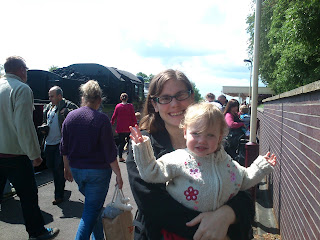 In the station coffee shop at Leicester 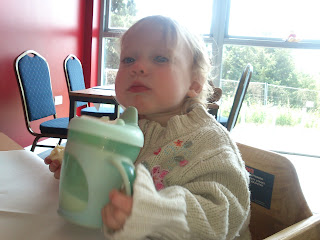 ... where one of the activities was a bouncy castle, which was very much enjoyed: 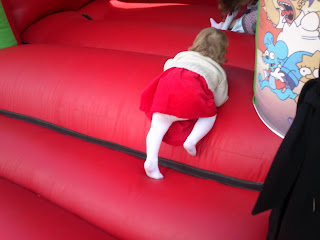 The return train that we took was headed by a diesel locomotive. (a Deltic I believe, if you must ask - but no, I don't collect numbers so wouldn't know that) 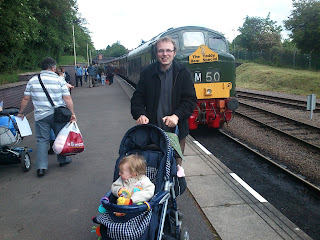 We took up a seat in an open carriage (with just loose tables and chairs instead of proper train seats), so there was space for the buggy. Naomi had a bit of a "dog in the boot" balance thing going on as she walked about. One of the highlights of the day was a large bear who delivered sweets the the children. Naomi hought he was great the first time, but on subsequent visits he was deemed to be scary, and only mummy was able to offer protection. 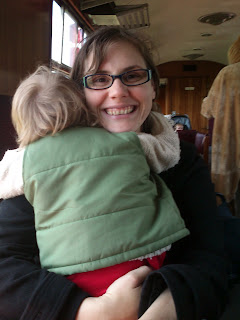 At the end of a tiring but fun day. If you stay near Loughborough, definitely worth a go! 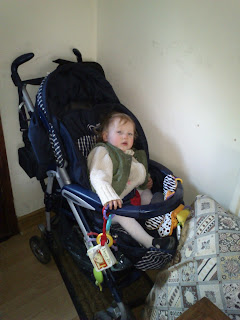