We start with two (actually three including non-visible ones) tired girls on the way back from a hard morning at IKEA*... 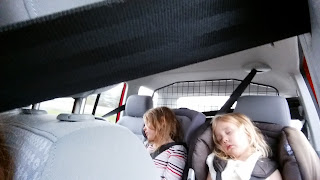 Naomi in particular has been asking to keep some toys in her room so she can have a bit of personal space. For this to happen we had to remove the futon (so story reading is a bit more uncomfortable) and we replaced it with some drawers to keep toys and dressing up things in. We also took the chance to get a wardrobe for the increasingly impressive range of dresses that the girls have - and for occasional visits of the Narnian variety.

Of course, the best part with such things is in the construction, and both Naomi and Miriam were very helpful. They were more than capable of sorting out the right widgets given a picture of what was needed, and screwing on the feet.


*other self-assembly furniture stores exist, though not as many as there used to be. No, we're not on commission. Have you tried the Swedish Meatballs?
Posted by oldchap at 11:20

Email ThisBlogThis!Share to TwitterShare to FacebookShare to Pinterest
Labels: Goings on, Miriam, Naomi