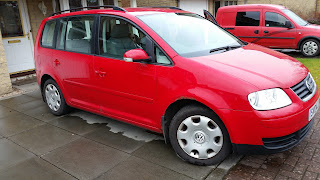 Trevor, it's the end of the road. Well, not for you, we assume. No doubt you'll provide a low-cost mode of transport for someone else with considerable but nevertheless still-only-requiring-5-seats logistical needs.

You arrived at a turbulent time for us. Our treasured Norman had met a sad end at the hands of those thieves who remain anonymous now (at least in this respect they were good at their job). Norman had a lot of "character", whereas you didn't, really. But that was part of the charm! The idea that the rush to hospital to have Naomi would not be accompanied by ropes holding the front doors shut seemed strange to us at the time, but you just soldiered on and got us there without a trouble. You might have been more expensive the past couple of years, but the first couple of years in Loughborough dealing with a real garage rather than "that guy down the road" we really appreciated that hardly anything seemed to go wrong with you.

You helped us move house four times; took our first three children home; provided transport for those long trips north/south; delivered kit to four Imagines; handled the coldest most toothpaste-freezingy winter ever, and one of the hottest summers; carried several wardrobes, a dining table and numerous other free bits of stupidly large furniture; and put up with many instances of child sickness, all without missing a beat. Ultimately, you just did your job, and if it wasn't frowned upon these days to put four children in to three seats (well, okay, that's well-justified), we'd be keeping you. 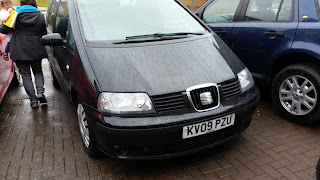 The new adventure now begins with Kevin. He seems good so far. the children are very excited about driving "in the boot"! It's just a shame that choosing boys names for cars seems to be so much easier than for children...


*note: I originally aimed to write an "Ode to Trevor" but the scientist in me just couldn't bring myself to do it.
Posted by oldchap at 08:31

Email ThisBlogThis!Share to TwitterShare to FacebookShare to Pinterest
Labels: car