I've been away a fair bit the past few months, particularly in the earlier part of the year. I'll do a quick roundup here - though I think the trip to Japan probably deserves a post of its own...

In late March I had a day trip to Manchester Airport to talk with them about their aircraft taxiing operations. This included a tour of the tower and a drive around among the planes. Very good stuff indeed and certainly some hope that some of our research project will find its way into a real airport some time in the future. 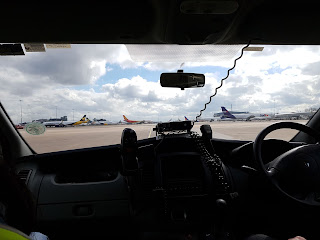 I flew straight from Manchester to Aberdeen, where I had a meeting about my sounds project. We got a good level of participation in the project and how have some evidence that we can use my optimisation algorithms to produce sounds that people associate with different places. Still, several months on, I have yet to write up the paper on the results, but all good stuff. This team was a real pleasure to work with!

I was then off on my Easter holidays for a little under two weeks. On return, I was off to London, twice in five days. Trip one was to talk about the airports stuff with the whole project team. This was accompanied by a visit to my sister (and a stay in exactly the same room at Chingford Premier Inn as last time).

Back again a few days later (we tried so hard to make the two meetings at the same time, but too many busy professors were involved). This time as an external assessor for a second year PhD student.


Finally, a few days later again, I was back in Loughborough for a catch up with various staff and students there. Also a worthwhile visit: lots of nice researchy things going on there.

All this travel has been useful (keeping all these links going is an important part of my job now) but I am not planning to travel nearly as much again any time soon!
Posted by oldchap at 14:41