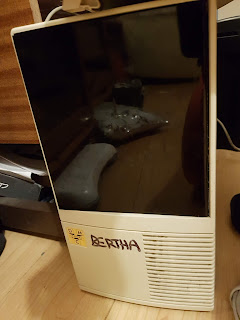 Forgive me for a little geekery!

This year I have finally said farewell to Bertha, a workhorse of a computer which was, for a long time, running away in our loft.

This machine was an original Pentium, so would date back to about 1993-1994. It was given to Jay for free in about 2002, and once we had something better for her, I took it on as a bit of a project. It was named Bertha after one of the earliest TV series I remember, and I upgraded the machine to a 150MHz CPU and 48MB of memory (up from 75MHz and 16MB), for a grand total on eBay of about £5 including postage. The only really expensive part was a half-terabyte hard drive so store all my stuff (the original drive in the machine having a capacity of about 1/2000 that).

It ran Debian Linux OS, and was all administered over the network. It did a lot of work in that time:
...and probably some other things too that I've forgotten! Yes, it really did run all those things - the only time its age really showed was when browsing the folders on the music server, and it took a few seconds to generate the pages. Here is the POST screen to prove its aged technology! 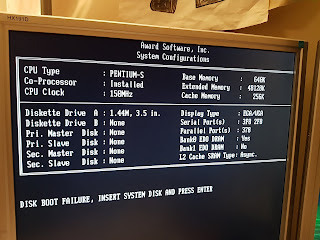 It was running constantly from about 2006 to 2013, when we moved to Stirling. After that its use became a bit intermittent as it was hard to find a spot to run it in our rented house here. Early this year I thought it would be worth firing up again for a return to service. Alas, its age had finally caught up with it: the battery in the BIOS (yes, actually built in to the chip package) was totally dead and irreplaceable. It gave me this screen:


On closer inspection, the troublemaker was the chip with "ODIN" on it below... 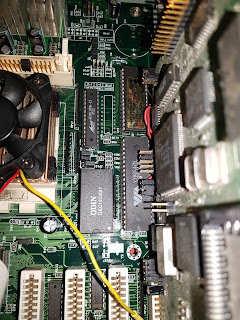 I took the chip package apart to get at the battery but despite some hunting it proved too difficult to find a replacement. So, after all this time, Bertha is no more!

I have managed to dig out another machine - as recent as 2003 - to take Bertha's place. It's got a 2GHz CPU (so crudely speaking over 10x faster, in practice a good bit more) and 4GB RAM (so 100x more). Though with much of my stuff moving onto the cloud it probably won't be anywhere near as useful as Bertha was. Sad times!
Posted by oldchap at 14:31