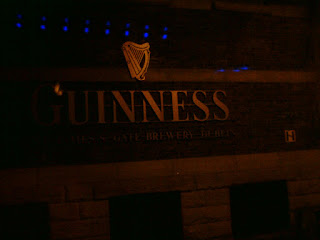 Last week I was away with work again, this time at the Genetic and Evolutionary Computation Conference (GECCO) in Dublin. This is one of the biggest conferences in my field - each year there are several hundred people at it - and if you want to catch up on evolutionary computing stuff it's one of the best places to go. As you'll have gathered from my trip to Paris I tend to quite enjoy this kind of stuff. Catching up with other people doing the same kind of research, seeing what else is happening at the moment and bouncing ideas around. 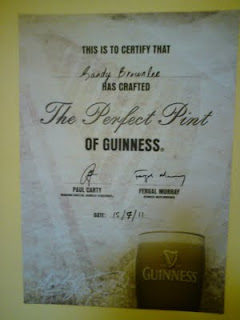 The different locations are quite fun too! GECCO takes place annually, every other year in the USA and in between "somewhere else". Needless to say, I had something of a chuckle when one of the first things to follow the venue announcement last year was the notice that the social programme for this one was going to be at the Guinness factory. Awesome. The Guinness people were also doing lessons on pint pouring, and pictured you can see my certificate. Dublin is also where Jay and I honeymooned and it was nice seeing some of the places we went again. 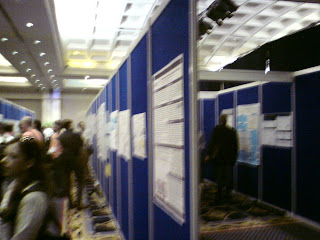 Of course, the main reason for going was research, and I spent a lot of time talking with people about various things. There's quite a few ideas sloshing around now that I need to think about! While there I also presented a poster of my recent work - for those who've not seen an academic poster before they tend to be a bit dry unless the creator is particularly creative (which I'm not) - and basically presenting involves standing next to it for a couple of hours while people come up to peer at it. Mine is the stripey on on the end in the picture. The idea is that it's a bit more free for discussion than giving a talk and taking questions and I got a couple of good suggestions out of it. During the conference I also had the pleasing experience of seeing one of the other presenters referring to my work - I don't think that's happened before and it felt pretty cool! 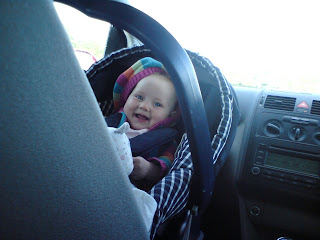 Of course, I was pretty tired on returning and took a couple of days to recover. I don't imagine this was much compared to Jay's levels of tiredness as sole child carer for the week though... Both her and Naomi were quite pleased to see me, and after a little uncertainness at the airport I got grinned at all the way home.

Finally, another update on food. We'll try to get a video sometime of Naomi eating broccoli - it really is worth seeing as she likes it so much it can't come fast enough. She really shakes and looks panicked in between mouthfuls! Yesterday we determined that she's not all that keen on cheese (mouth clamped shut) - but many readers will be pleased to note that she is keen on toast, and here she is enjoying some. Also, as of yesterday she's now officially twice her birth weight at 14lb 10oz. 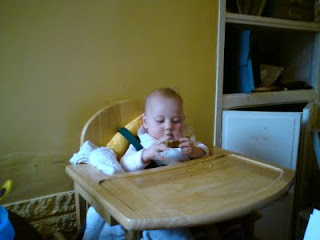