So, we have been back from Scotland for almost a week now and have been busy trying to get back into the swing of things, hence the lack of posting this last week or so.  One of the things we did was to go to  soft play place, this photo has nothing to do with the post as a whole but I like it so much I just have to share! 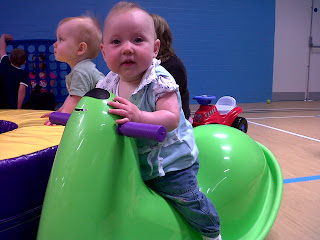 Anyway, what did we do in Scotland? Lots of things, though, for me, I was trying to use the time to rest as much as possible so making use of the babysitting services that come with being around the grandparents!

One day I was in desperate need of a nap so Sandy, Ian and Grandad Brownlee all took Naomi to Aden Park for a walk while I lay down (I didn't manage to sleep, but I got a rest at the very least!), here are some pictures from their exploits

There was one day in particular I was pleased to have family around, from Naomi waking in the morning to taking her first nap was 7 hours!!! And that nap only lasted 30 minutes!  Thankfully she wasn't too grumpy though and we even got what might be my favourite picture of Naomi so far.


Naomi was really good over our time away with being in lots of different houses and places, she is so laid back and is very good at just getting on with things.  We stopped off in Edinburgh on the way back to break up the journey, unfortunately the Donalds, whose house we were staying in couldn't be there (for the very happy reason that their son was getting married that day) but Naomi still got stuck into making the house her own!


Well, I think it is time for us to go now, so Naomi will show us how it is done!