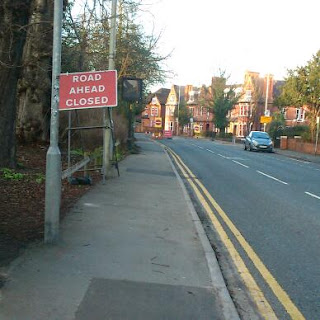 What do you think might be the message conveyed by this sign? Or the many following shortly after, going right across the road? Or the 8 similar signs preceding it along this very road? I'm at a loss. Clearly given the large number of cars driving around the cones and yellow no-entry signs, which then proceeded to avoid oncoming traffic by driving fast and ducking in and out of gaps between cones and large holes in the ground, the message isn't anything about the road being closed.

Sarcasm aside, I'm glad the polis showed up the next day to rectify the situation, it was a bit worrying being faced by head-on cars when I was travelling home at night in the opposite direction. (in case you're wondering, provision was made for cyclists to still proceed along the road in the direction it was closed - for this way lies student-town and many cyclists)  Still, Loughborough is more cycle-friendly than Aberdeen!

In other news, I thought I'd share a picture of a giant hydraulic ram. It's right in the centre of the picture below, and is used for smashing concrete into many pieces. This is the lab building in which are housed the computers that my experiments run on. There's a few other things that anyone like me who's into gizmos would like; including a flood plain simulator and "3D inkject printer" which makes models of buildings up to 10 feet high. One of the cool things about being in a non-computing department is the big set of different toys to peer at! They've not let me play with any of them yet though, apparently they're expensive. 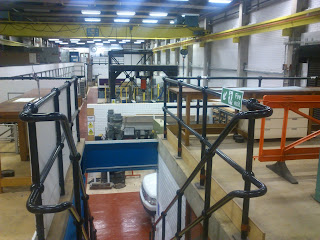