What we get up to

A wee while ago I did a post about all the things that Naomi and I get up to, of course, as Naomi grows the things we do change too, so I thought I'd do another post telling you about now!


Monday sees us go to a group called Little People, it is run by one of the local churches and is just an opportunity to play with lots of toys and other children in a bigger space than we have at home!  Naomi loves it and likes to hear the story  and have a drink that happens each week (although I suspect that has more to do with it being one of only 2 times in the week I allow her to drink squash rather than water).

On a Tuesday we have a similar group run by another church, this one is called Play Time.  At this group we also get to have a play in a soft play room, Naomi loves this, particularly the slide in the room.  Every week my blood pressure is significantly raised as Naomi, who has no fear, toddles around and tries to go on lots of things I am sure she is too small for!

On a Wednesday and Thursday we don't have any particular groups to go to, but we take frequent trips to the park, Naomi is particularly fond of the swing and the slide but just being outside makes her happy!

We also go and see other friends, Naomi is not very good at sharing (not that you would expect her to be at her age) so we like to get lots of practice in the hope that it won't *always* end in tears!

Every other Friday we have my Mum's cell group, I get together with some Mums from church and we support each other in the very difficult task of being Mums and in being Christians.  I love this group and Naomi quite likes it too as there are bigger boys and girls to play with, she seems to like being bossed around!

The weekends are lovely here, Saturday is a day that Sandy, Naomi and I can all spend together, we sometimes go for a walk or another trip to the park but it is just nice to be a family.  Sunday is mainly taken up with church, Sandy and I both serve on different teams so we share serving and childcare but Naomi is very easy at church, she loves everything that goes on there and the friends she gets to see.

That said, our routine is all to pot at the moment as Naomi tries to work out if she is still a two naps a day kind of girl or if she is only going to nap once!  The days she only naps once she tends to be exhausted but it can be very hard to convince her to sleep more!  She is also tired because last week she learned to walk!!  We will try and get a video of that together soon and you will be able to see for yourself.

Thanks for reading!  Here is a photo to reward you 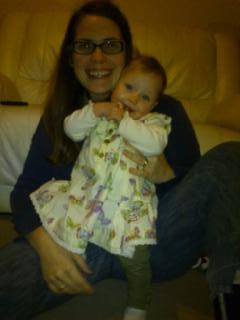