I guess most of you are expecting me to say something about this.... did anyone else stay up for the results? I was up until about 4am - at which point Lydia was settling back down from her night time feed. 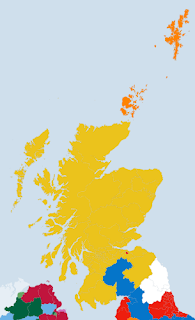 Obviously I'm pleased with the Scottish results, though have somewhat mixed feelings given the UK-wide result. Maybe some of you will feel differently (either good or bad): but for now I'm just pleased that the local campaign I was involved with in Stirling has been successful. I've been out campaigning a good bit less than I was before the referendum, but did what I could (alongside many others working much harder than me) and it's quite satisfying to see a win come out of it. From the few times I've met Stirling's new MP, he's a good guy, as are many of the new (and indeed many of the outgoing) MPs.

Much as I said in 2011, it's great to see that even in the previously very safe seats people have felt that their vote counted and made a vote for a change, maybe for the first time in their lives. Turnout is up a good few percent on the last general election, and this is also very much a good thing. I hope we can keep this kind of engagement long-term.

Prayer is now needed that all our new representatives can work constructively together for the greater good. We have an interesting few years ahead once again.

Now, on to some work! I've still got a whole Friday of code and paper writing to do. A couple of pints of tea ought to wake me up...

Email ThisBlogThis!Share to TwitterShare to FacebookShare to Pinterest
Labels: political_geekery