The final leg of our Scottish tour was a few days with my parents and my brother Ian in New Deer. We had a restful few days and it was good to see my family again, including a first meeting of my brother's fiancée Christine.

We open with Naomi showing everyone how to wear oven gloves. For some reason she really liked them! 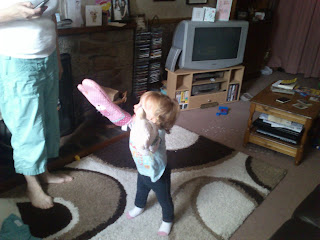 While Naomi was still in utero, we decided it would be nice if she climbed a Scottish mountain, so we went for a hike up Bennachie, a small mountain that dominates the horizon of  North East Scotland (partly because everthing coastwards is fairly flat, and partly because it's got a distinctive twin-peaked shape). It's also very close to where Jay's parents live. We decided that Anonymous Brownlee might like to have the same experience, so we went for a similar walk again. We didn't have a chance to do it from Keig (Jay's folks), so we took the Brownlees on the trip instead. This time, of course, we had a toddler to take on the climb too, and we'd forgotten to take our backpack - fortunately our good friends the Gregorys (who have many children) no longer needed theirs and gave it to us for the trip. Here's Naomi and me enjoying the first part of the climb. 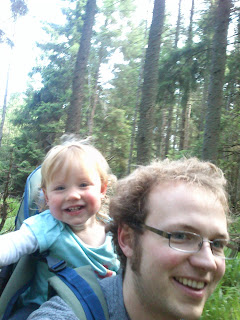 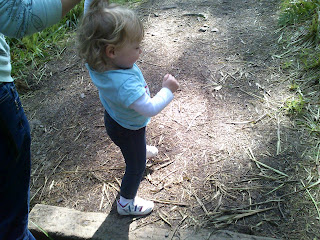 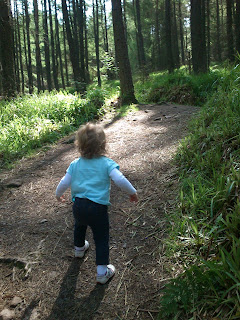 Unfortunately we didn't make it to the top this time - Naomi got a little tired of the whole exercise about two thirds of the way up - but we still got a good view and had a nice day out.

You'll maybe remember that one of Naomi's first words was "Duck". My brother has a very large collection of Lego and Duplo bricks (I'm jealous!), and here's a duck I made for her. 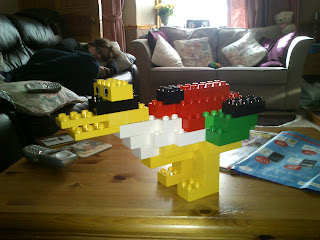 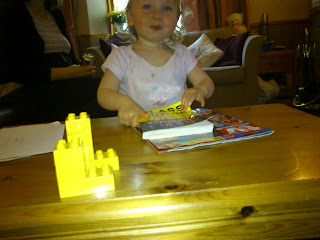 New Deer sits on the side of Culsh Hill, at the top of which is a granite monument to one of the area's long-serving MPs. We went for a walk up the village with a stop off there; there's quite a good view from the top but unfortunately we were greeted with a sign telling us that it was locked and the key could be obtained from a shop at the bottom of the hill (which we'd walked right past). On the way back, my Dad got attacked by flies, and started waves his hands about. Naomi thought this was hilarious, and even now we've returned to Loughborough, whenever she sees a fly she starts waving madly! 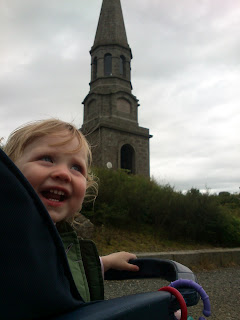 Naomi had fun playing with the many outdoor toys my parents have stowed away, including a trike which my nieces Kirsty and Ashley used to have: 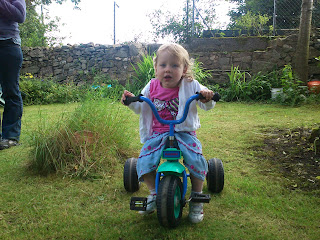 a sandpit bought for my niece ad nephew (Holly and Steven): 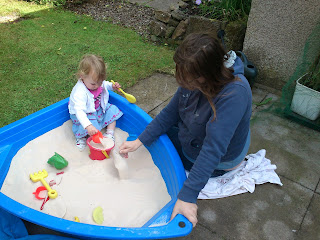 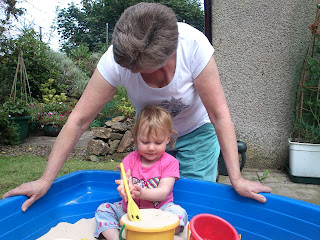 and a little red car which I used to play with... 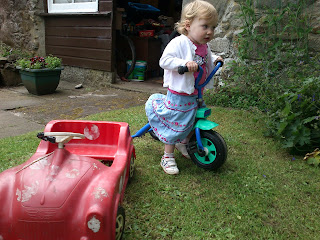 Travelling meant many opportunities to use grown up things! Here's a big girl drinking out of a big girl glass. 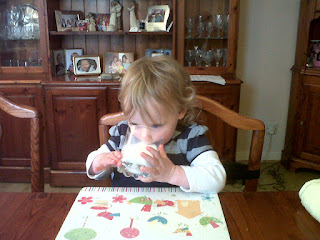 Finally, a bit more walking, this time along the old railway line at Maud (village a couple of miles from New Deer). My Mum started doing some silly walks which Naomi just loved to copy! 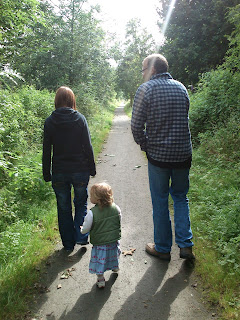 So, that's our Scottish adventure for the summer. We packed a lot in to just two weeks, and came back feeling pretty tired still! Naomi was very excited to be in her own house again (and not in a car any more), and we had a whole day to settle before a quick trip down to London. More on that soon (still catching up on blogging things!)

Somewhat time-critical - for those of you who pray, please pray for our housing situation. We're moving to a bigger house to accommodate the new child; this will stretch our budget a lot, and we're finding it difficult to get a place that matches our needs and wants. We think we have somewhere we can make work, but there's a number of the usual hurdles to pass, and all the while someone else could bag it ahead of us. Also pray that our landlords Rich and Caroline - who are just great - are able to find someone to quickly take our place.
Posted by oldchap at 11:57