Now, on to Imagine. It's a big festival for young people which happens each year, designed for young people to encounter God and return to their communities to make a difference. It's a bit like Soul Survivor if that helps, but on a smaller scale. A few hundred young people come to the event, which is based at Thainstone, Inverurie (20 min drive from Aberdeen), which also happens to be a mart. That is, where farmers come to sell their cows an so on. The mart activity keeps going while Imagine is on, and it's quite amusing to see two very different groups of people together. For much the same opening paragraph, and how it went last year, you can go here.

Jay's job this year was running the information team, who sell entry tickets and give information to everyone who comes to Imagine. Delegates and speakers alike expect Jay to be able to tell them everything from the exact location of the power sockets in the random room they find themselves in, to the shoes size of all the Imagine directors. It is a fair amount of information she needs to keep in her head, which this year was extra challenging due to an increasingly severe case of baby brain! People also assume that Jay can resolve absolutely any issue they have, from a stuck chocolate bar in a vending machine (which belong to Thainstone, not Imagine!) to needing a first aider. Jay also finds herself trouble shooting the most bizarre of situations: this year's finest was finding an emergency lift to Aberdeen for mother, baby and young person for only an hour or so later! It's no small job and it takes a serious gift of administration like Jay has to do it well.

My job was to coordinate the tech team - excepting the PA for the main worship sessions, our job is to look after everything with electricity running through it at the event. This includes smaller PA systems, video projectors, cameras, lighting and power for numerous venues. Our team work silly hours (8am to midnight most of the days), and are frequently seen running about with bits of cable. We had couple of changes on the regular team this year, in addition to Paul and Lewis from previous years we had Phil (a guy with the coolest job ever - making YouTube videos!) and my brother Ian. We all got on great and it's a good team to be part of. We also get to play with shiny things like this pro camera, which was hired for the event: 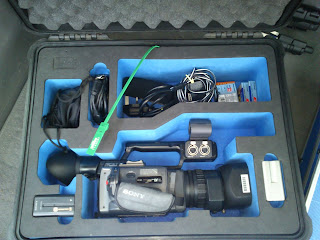 Most of the young people (and accompanying adults) camp in one of the fields attached to Thainstone. This week was a bit on the damp side... 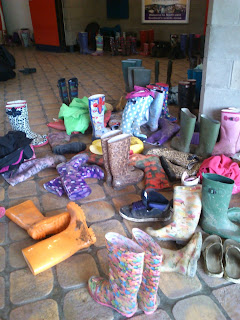 In the marketplace were two inflatable chairs. On the days Naomi came to visit she thought these were fantastic.

There is usually a talent contest at Imagine, running on a few of the nights, with a final on the last night. It's one of the most popular activities during the week (based on the numbers coming), and is usually based on the current big thing on TV. Previous ones have been named things like "Imagine's Got Talent", "Strictly Talent on Ice" etc. I'm always impressed by just how good the contestants are! This year's was "The Voice Of Imagine", and here's the venue set up... 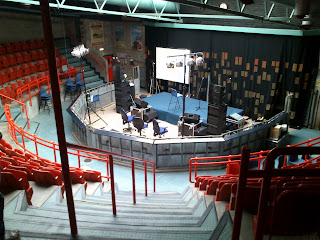 and here are the three judges, complete with swivel chairs. 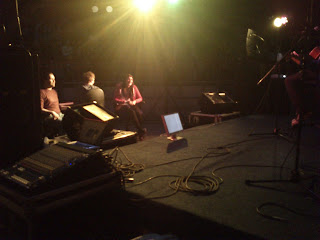 Here's this year's tech desk, home to us on the tech team for most of the week. Look closely for the essentials: Irn Bru and Mars Bars. 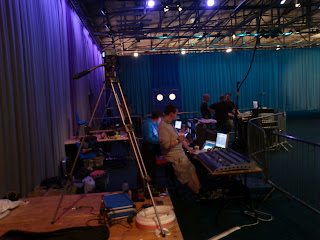 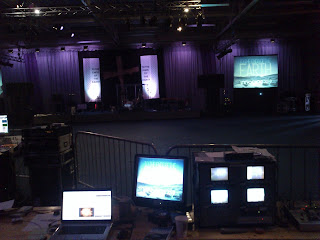 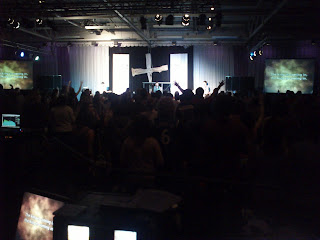 I think I mentioned before that NESYFC have got themselves a football cage, something I was keen on making happen when I was more involved. Here it is for real - I'm responsible for the banners on it; the black one has our fireguard in the background as I didn't have a closeup of the cage to hand! 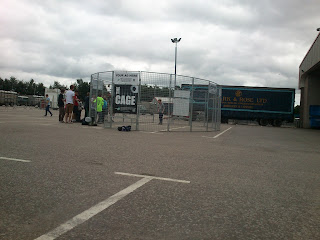 We thought this was quite funny - driving over to Thainstone one of the mornings, we got stuck behind this tractor towing a cess tank. It was full enough that it kept spilling over, needless to say, it got a very wide berth when we overtook it. 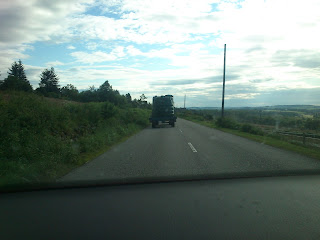 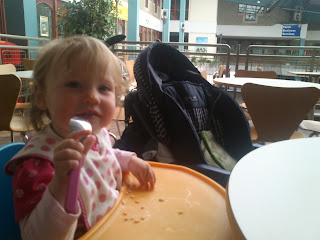 Unbelievably, Naomi took a nap at least once right in the middle of all the action. She was one tired girl. 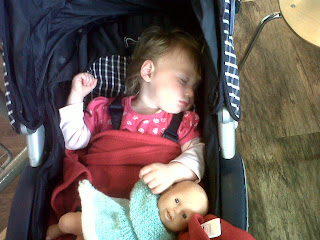 All in all, a tiring week, but definitely worth it.
Posted by oldchap at 20:56