A catch-up on happenings at Christmas... this year we tried to keep travel to a minimum as Miriam is still pretty small (though it turns out she's much better with the car than Naomi was!) We spent a week with my parents, a week with Jay's parents, and had an overnight stop-off on the way up (with the Donalds in Edinburgh, formerly of New Deer) and on the way back down (with the Baines in Cockermouth, formerly of Loughborough). Naomi really got what was going on this year - I think that Christmas possibly went a bit over Miriam's head!


On Christmas morning, we'd tried to avoid too much of a build up lest Naomi became over-excited. So she came through at about 8am (having slept in my parents' room), and we explained that Jesus was God's present to us, and we remember that by giving each other presents. On the word "presents", she lit up, and was most excited to start tearing off paper! 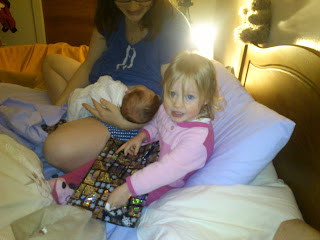 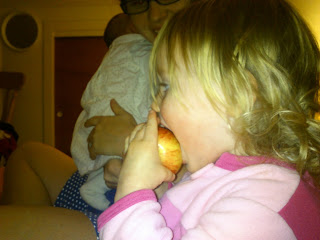