So, for the fourth time in my life I'm working for a person named Jon (okay, the spelling's different this time, but that doesn't spoil it). Not that this is somethings to worry about, they've all been very nice people... I've now been at Loughborough University for nearly three weeks and have started settling in pretty well now. I've even got a permanent desk! Just waiting for the computers I'm going to be using to arrive now - until then I'm on a temporary but perfectly good laptop. I'm slowly getting back into the habit of reading academic papers; this took longer than I thought but it's coming along nicely now. It's quite nice to be able to spot interesting things and know I'm going to have the time (probably) to read about them properly instead of a quick skim at best. There's no experiments running yet, though we're pretty close - I've implemented an algorithm and a few test problems, and there's a screenshot of it running below - each one of those dots is part of the population that's evolving, and the blue ones are the best ones. 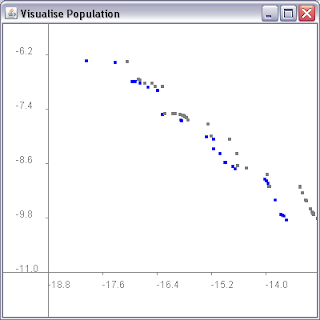 One of the cool things about being in an engineering department is that there are lots of cool machines to look at - I got a little tour and they have loads of stuff. There's a cube-shaped machine about 10m in size that can make 3D models of buildings (they likened it to a 3D inkjet printer). There's a laser lab, and a sun-machine which puts out extreme light levels for testing solar panels. There's a room completely filled with a model valley that has water jets for simulating flood plains. Plus there's this collection of water pumps outside - I saw these on the day of my interview. 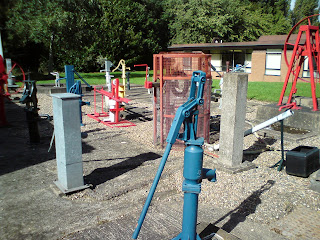 Yesterday Jay drove down to have lunch with me at the university (that's something we didn't really get the chance to to in Aberdeen). She brought the large box of research stuff from my old desk at RGU that's been gathering dust for the past couple of years. It's been quite odd going through my old notes and waking up some of those ideas again. There's also a few things which cheered me up greatly - my executive toys for restful moments of distraction and a bunch of memory items like the poster advertising the seminar I gave at Stirling Uni. There's been a lot of digging up old memories as part of the move and it's a shame the rest of the experience is so expensive and stressful because that bit is quite nice! 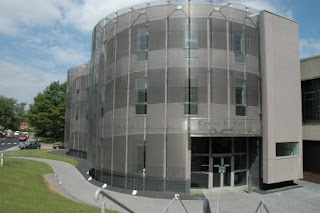 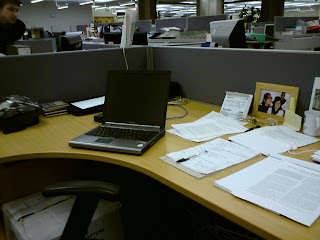