As many of you might be aware, Sandy, Naomi and I are all just back from the Open Heaven weekend away.  All three of us are pretty tired after the experience, Sandy and I both were very ready for bed last night and Naomi has been napping more than usual today!  The weekend was really good though, it was lots of fun to be away with our new friends and have an opportunity to make even more friends from within the church and on top of that there was some top rate teaching and times of worship to help us feel closer to God, which we both did by the end of the weekend (perhaps Naomi did too, but it was hard to tell!!)

The theme of the weekend was "The world-changing story" and was broadly about engaging with scripture and how we do that better or more often but also how our own story fits in with that of God's story, which is, of course, what the Bible is about.  The main speaker was a chap called James Treasure, I had heard him speak a fair few times as he does a lot of the broader Bible teaching on DNA and he was just as good as I remember, and just as likely to get distracted by anything and everything that goes through his head!!  He is very funny but in it all is able to get across a point very well and leaves you at the very least thinking lots about what he has said.

Sandy and I have been to similar get ups before, with times of teaching, worship and just some free time to hang out with people and thankfully we had gone with the mindset that it would be very different to how it had been before because, we had Naomi, who wouldn't be willing to wait for getting her nappy changed or being fed or whatever the thing she wanted to cry about was.  She was also no more likely to sleep through the night, although the good thing about her being so young is that only being able to see about 12" in front of her, her Moses basket looks the same regardless of what room it is in and feeding works much the same whether you are on the Welsh/English border or in the heart of the East Midlands!

Naomi is also still young enough that she doesn't really mind who is cuddling her, so the weekend away was great for her as there were lots of people who wanted a cuddle and Naomi loves having some arms wrapped around her, it seemed to be a mutually beneficial situation for most people!  Although Sandy and Naomi were having a lovely cuddle when we got this photo 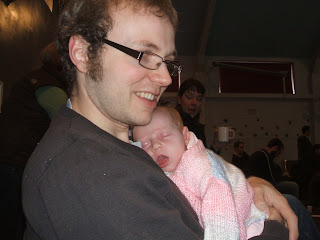 At one point Sandy took Naomi in her sling and they went off on a walk, it is the longest that she and I have ever been separated and I think it was more stressful for me than her.  I tried not to snatch her back when sandy returned but I really did miss her terribly, I think it was good for me to let her be off with her Dad though and good for him to get to have that time with her.  The walk took them just over the Welsh border, so although I have never been in Wales, Naomi now has!