We thought you might like to hear a little more about the church that we attend down here, it is a while since we have said much about it.  Today seemed like a great opportunity as OH2 had their first ever baptisms!

Meeting in a school, as OH2 do, there is no baptismal pool to do such things in, so we got round this problem by having our service and praying for Connor and Joe and then all driving down to the swimming pool which we hired for the occasion.  Many churches see that baptism is something the congregation should all take part in, however, it was done in a way that neither Sandy nor I have come across before.  Connor and Joe (who are brothers) said they knew and trusted Jesus and promised to follow Him for the rest of their lives.  Then everybody said together "We baptise you in the name of the Father, The Son and the Holy Spirit" before they were dunked by their Mum and Dad - there was no doubt that everyone there was supporting them in what they were doing!

After the baptisms had taken place it was felt there was only one thing to do, after all, we had hired the pool for the minimum of one hour! 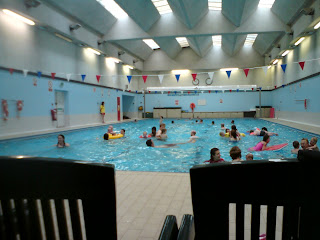 Sandy and I thought that we should let Naomi have a play too, she has never been in a swimming pool before today.  We couldn't get a photo as Sandy and I were both i the pool with her, however, here she is just after she came out before Mummy got her dressed again!  (Thanks to our friends the Lyons for the long term loan of a swimming costume!) 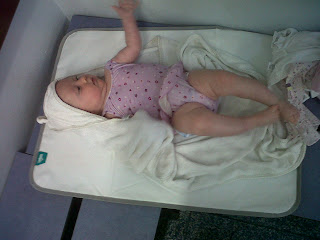 Naomi experienced other liquids for the first time this weekend, while her Dad and I sheltered from the rain on a walk that got wetter than we would have liked.