So I have a nasty little bug (or possibly hayfever, but probably not) and haven't slept much the last couple of nights, even when the little one has been managing to sleep just fine. Pleasingly, especially as she's in our room while our friend Cat visits, she's only woken up once each night this week - although last night was an exception. Cat looked after Naomi while Jay and I went out for an hour or so of "couple time" - unfortunately Naomi woke up while we were out and was NOT impressed that we weren't in. This may be the reason she was up more than hourly last night (though she also has a bad cough just now which won't have helped) - with the result that I and very much mummy are both very sleepy. On a happier note at one point in the night she really got the hang of the "b" sound, saying "bubububub"* a lot. She's getting pretty close to "m" now :) *(I think this translates from baby into English as something to do with Markov chains, but why she'd be talking about stochastic processes is beyond me... Equally I could have misheard and it's actually something more like "give me food". I guess we'll never know.)

On a still cheerier note, more on how nice the campus is where I work (and more so as we move into summer). This week I've had two occasions to walk down to Holywell Park - which is a chunk of the campus the university acquired from British Gas a few years ago when the latter stopped using it as a research base. The first visit was to the research staff conference, something Loughborough Uni do once a year to encourage researchers from different departments to work together - all very encourgaing and it got me all first up for more research to come! Here's a couple of pictures I took as I left the conference - plush or what? :) 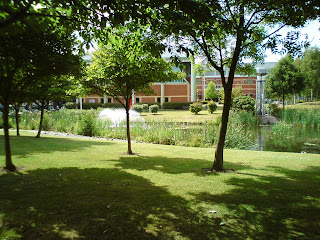 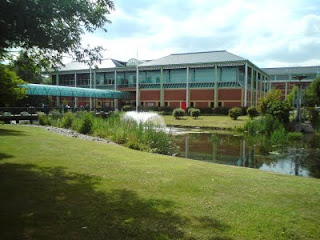 This morning I was back down there, having finally managed to link up with someone at the computer science department. It looks like I'll be giving a seminar down there on my work some time, which I'm quite excited about. Just have to come up with something to say now - but all good academics have a lengthy talk up their sleeves so that should be alright.

Finally, I note that RGU's new campus is now under construction. Quite pleasing to see it all take shape, in part as I was still one of the student governors when the plans were all approved. Maybe at some distant point in the future I'll be working there... In the mean time there's a nice fly through video on you tube to have a look at: