Many of you will know that Naomi hasn't been sleeping as well of late, proving a little harder to settle at night then waking up every couple of hours or so. This is in sharp contrast to the sleeping-right-through we had a few weeks ago. Consequently, both parents have been somewhat tired. We've been working through a number of things which might be causing this:

The most recent plan was to take the dangerous step of changing her during the night, and using a disposable nappy as they're a bit less fuss and better at doing the absorbing. So, increased comfort, but given how much she loves changing (not much) it leads to a very awake child.

Anyway, last night sleep was achieved within minutes (good for Jay as I had to be out), and then only one awakening (albeit a lengthy one) prior to about 7am! Both parents were suitably pleased with this outcome as the tiredness is causing some odd things to happen. Of course this may have been a one-off - but we hope it'll continue. So no changes to the winning formula for tonight. The sleep issue has of course made napping happen a bit better as she gets tired through the day... 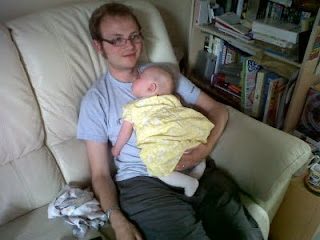 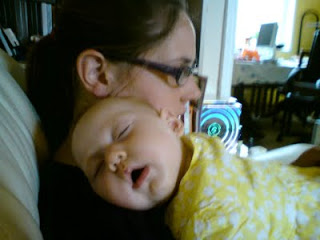 Feeding is coming on well - here's one of her first taste of non-milk water.... 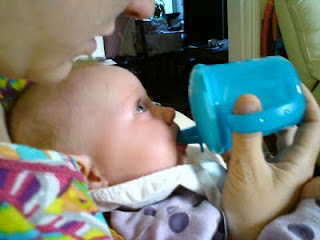 We've yet to find a food she really doesn't like. Normally the first try of a new food is met with some hesitation (and mess) but the second try usually goes down a treat. Here's the first experience of butternut squash - as Eddie Izzard would say - COVERED IN FOOD! 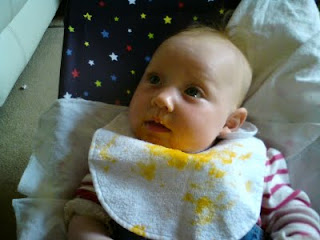 Update - presumably this food business is helping her to grow - today she was weighed in at 13lb 2 oz! This is fast approaching double her birth weight. (I wonder what age it becomes inappropriate to post her weight on the Internet?)