So much has been going on this past week or so that I am not really sure where to begin!

My best friend, Cat, has been down staying with us.  It has been lovely for me to have an extra pair of hands around the place, to help with Naomi, housework and, most importantly, making cups of tea! It was lovely for Naomi too, to have "Auntie" Cat to play with every day and not just Mummy, who is good but gets boring after a while!

While Cat was here we went swimming, it was good for me to have an extra pair of hands while I get more confident about taking Naomi in and out of the pool, though this pool has steps (rather than a ladder) which made it much easier.  Cat was able to get some photos of us in the pool as she got out a little before me and has a very nice waterproof camera, so here is Naomi enjoying the water. 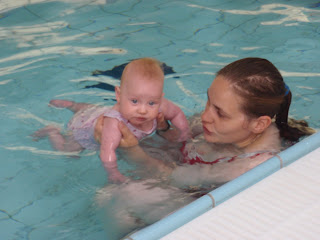 We also happened to be able to go to a ceilidh while Cat was here (odd given our Englandshire location, it is apparently an annual event for Open Heaven!) which also gave us the opportunity to leave Naomi with a "proper" babysitter for the first time (I am defining proper baby sitter as someone who isn't family or such a close friend that they are practically family).  Thanks so much to Lotty and Jim who did a brilliant job of watching TV while Naomi slept (with only a brief waking, dealt with by re-inserting the dummy) while Cat, Sandy and I danced the night away.

Well done to everyone from Open Heaven for their amazing ceilidhing skills, we had an awesome evening despite having been really quite ill (we are now on the mend, thank goodness) and having thought about cancelling.  Sandy and I even won the prize (a full bottle of Laphroaig Whisky none-the-less) for the best dancers.  We had thought we would be automatically disqualified from winning for being Scottish, but we walked away with the very lavish prize.  We will need to make sure we invite lots of people round to share the whisky as I am not sure we will be able to drink much of it ourselves. 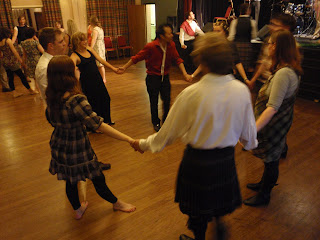 On Monday, Sandy took the day off work and we drove down to London to see his Mum and Dad who were staying with his sister and her family.  We had a lovely day with Naomi enjoying playing with her cousins and getting spoiled with cuddles from Grandma and Grandad.  It was absolutely blisteringly hot (over 30C) and so we cracked out the paddling pool, Naomi was a little uncertain at first but he was in her element by the end.  We also went along to Chingford Cherubs with Holly who was excited to take her cousin along to the mothers and toddlers group at the local church. 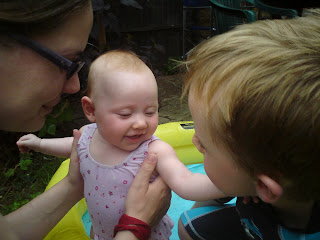