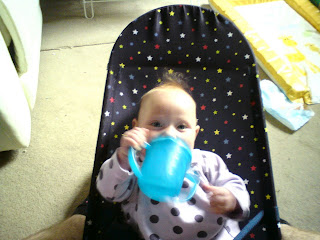 In addition to figuring out spoons, Naomi has now managed to work out the subtle are of cup holding. This is useful as some of her solid foods are a bit on the solid side and she'd developed quite a taste for a bit of water (usually getting quite upset when it's taken away). This can only increase as according to the EAT study from today she has wheat in her diet too, at the moment in the form of weetabix which is well-known for its alternative use as sandbagging in the flood prevention industry, such is its absorbing capability. Typically at the moment it's a bit of a messy affair - she ends up very wet - but nonetheless she's getting pretty skilled at the old motor control. Last night she also found her feet for the first time, and had a good grab of her toes prior to bath time!

We're also quite pleased that the past couple of nights have been much better sleep-wise - last night she woke up once and was asleep again after 15 minutes, with no feeding :) Long may this continue.

She continues to get more engaged in toys and playing with stuff. I think I may have posted a shot of her enjoying this toy before but this video is rather neat; she's playing with a watery pillow which her Grandma got her, it has some floating shapes in it for her to bat around and she's rather pleased with it. Also look out for her spotting that I'm filming her activities...