As per the previous post, I was in Milan last weekend for a stag do. This was organised for James, one of my good chums from uni. I've wanted to see a race for quite a long time and this was a good excuse to do it - plus catching up with some of my friends who I've not seen in ages. (though possibly more often since I've moved!)

It was a pretty good weekend - we went to see the Grand Prix at Monza, one of the fastest circuits in the F1 calendar. I've not really followed F1 for a few years now, so I'd been trying to catch up with the sport before the weekend; the last time I was in to it, a German driver was pretty much guaranteed to win any race, there was strong competition for places 2-4, there were a couple of reasonably good British drivers, McLaren and Ferrari were pretty good teams and people were always moaning about rules changing. Hmm, turns out not much has changed :)

Disappointing as a non-baby-picture post is, here's a brief roundup of the weekend... 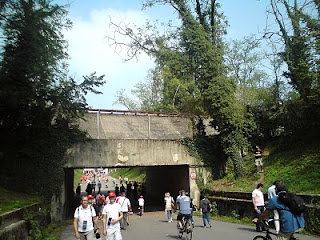 Here's Monza's old track; it used to be an oval with some pretty high banking. That nearly-vertical wall with a crash barrier at the top actually used to have cars driving along it.

We had pretty good seats for the race - at the end of the starting straight, so cars were going pretty fast when they went past us, but we also got to see plenty of action at the bends. Every time a Ferrari went past the Italian crowd went wild! 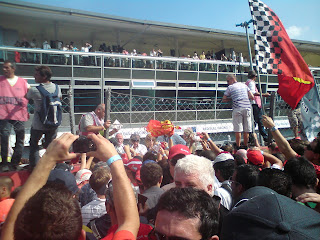 Here's racing legend Jackie Stewart doing his best to look cool in the crowd. (he's the one behind the fence in a tartan cap) 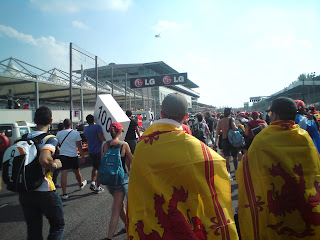 Here's a particularly cool bit - after the race you get to go on the track and wander round. We all had Scotland flags on for extra fun! 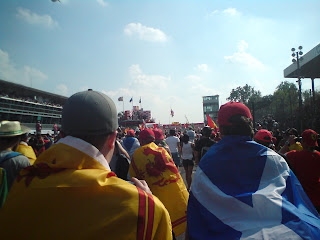 The winners doing the champaign bit at the end of the race. 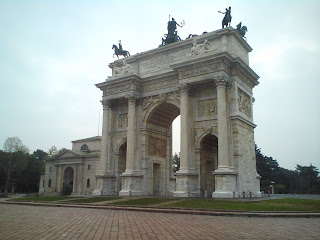 Milan also has some nice stuff to look at. This was on the first day before any racing or much beer consumption (of which there was surprisingly little - for most of us...) And that's the weekend. Good fun - if you ever get the chance to go to a Grand Prix, it's well worth it!

Oh, yes - Naomi crawled for the first time on Tuesday, right after I'd come back. She is now perfecting the art. Next up - pictures of her playing with sand :)
Posted by oldchap at 13:12