We recently invested in a box and some play sand for Naomi to have a go with. This is particularly useful because Loughborough is almost as far as one can get from the seaside in Britain.

To start with, she seemed to be more interested in plants, rocks, beasties and other things on the ground outside.... 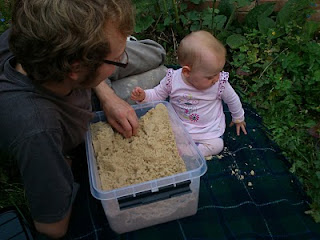 However, once she'd figured it out she seemed to have quite a good time. She's getting the hang of how things feel just now - this occurs with food too - where she grabs a handful of something and intently opens and closes her fingers on it. Sand works well for this! She also likes picking it up and throwing it about - which is why proceedings took places outside. 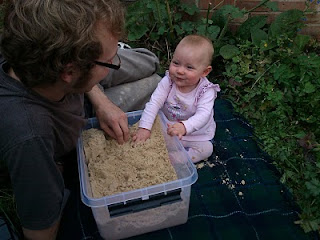 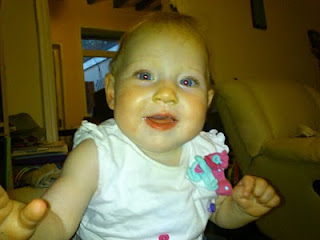 She's also getting better with moving about all the time. She can now sit herself up after having a crawl - and her crawling range has increased to nearly a room's length now, dependent on her mood. She can also pull herself up to standing some times, though it's clearly pretty tiring as she falls down again pretty quickly. (this makes bathtime for more "interesting"). If helped into position she can now stand for quite a while, using something as a prop: 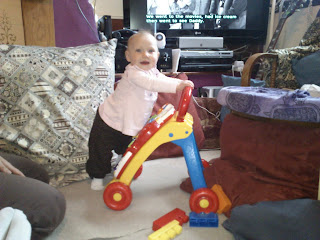 She's growing all the time :)

To conclude, a quote from a helpful video played in Springfield Elementary School...

"So the next time you're walking on the beach, enjoying an hourglass, or making cheap, low-grade windshields, think where we'd be without sand!"