Most of you will be aware that Naomi Jane Maimie Brownlee was born on Monday 24th January at 8:34pm weighing 7lb 5oz and that she and I came home to Sandy the next day, but if you didn't before you do now! This is a post to keep you up to date with how we have been getting on the first few days of our lives together.

First, lots of people have been asking about the name, so to answer your questions there. Naomi is after the person from the Bible, to be found in the book of Ruth, she was a person of great faith and faithfulness and this is something we would love our daughter to grow up with.  As well as that, we think it is a pretty name!  The first middle name, Jane, is after Sandy's grandma.  We know she would have loved Naomi very much and although she died a couple of years ago we wanted to say something of how important she was to Sandy and to the Brownlees.  Finally, Maimie (if you are not sure, it is say may-mee) is after my aunt.  She died last year but was of huge importance to me, I loved her and always knew how much she loved me.  She would give me a row for saying anything about how brilliant she was because of how humble she was with it, but I want Naomi to know something of the great heritage that goes before her, and what better way than to use Auntie Maimie's name!

The next most commonly asked question is about how the birth went.  It was all very straight forward in the end, although not necessarily as planned!  We had planned to birth at a birthing centre and to have a water birth, however there were a few concerns about my blood pressure and so I was sent to the hospital to make sure they were nothing.  Turns out they really were nothing but it took long enough to discover this that Naomi decided to make her appearance!! We were about to be sent home when I asked someone to check how far along I was (I was having contractions, but not regular enough to be considered to be in "established labour") it turned out that I was already nearly fully dilated and as a result the only place I was going was a room to give birth straight away!  Naomi was born only about an hour later, although did have the good grace to wait for her Dad to get back from the car with the bags that had all my and her stuff in them!!  For those who don't want any gory details skip forward to the next paragraph, for those who are interested keep reading... Naomi decided not to be completely standard, as such my waters didn't break until her shoulders were out and she was born in her sack, we are told this is very unusual.  Also, I did need some stitches, as much as this would have been better avoided, Naomi was just too quick and there wasn't time for the midwife to draw breath to tell me not to push, let alone for me then to follow through on that request!

Sandy went home a little after midnight, he was tired too as I had been up and down a lot the night before as I had been having contractions all night at about 10 minute intervals, that is hard to sleep next to! Not long after this I was taken to the post-labour ward.  I was told I had been "running around" so I should be able to walk, I was more than able to walk although I think the running around referred to being willing to walk back from the bath to my room!  The staff were lovely and helped a lot with getting feeding going and even taking Naomi for a couple of hours in the night so that I could get some much needed sleep.  That said, there were lots of crying babies there, Naomi was kept up by the other babies and I felt guilty when she was keeping up the other babies and so when I was able to come home the next day it felt like this was for the best.  I was also excited that Sandy and I would be able to start our life as a family.

I have already shared this picture, but this is Naomi all ready to come home from the hospital in the outfit that Grandma bought for her and strapped up in her car seat for the first time


The first day at home was alright although the night time was tough as Naomi being only a few hours old was not really sure how day and night worked and was up most of the night.  The next day we were all tired but we were both surprised and pleased when Naomi slept really well that night, and has done ever since.  She is waking every 2-3 hours to feed and then settling straight back down, most of the time anyway.  We are very pleased and although we are sure it will not always be this easy we are incredibly grateful to our daughter that she is breaking us in so gently!  Here she is all snuggled up in her sleep suit and "grow bag", this is how she is sleeping at the moment, in the Moses basket next to me in our room. 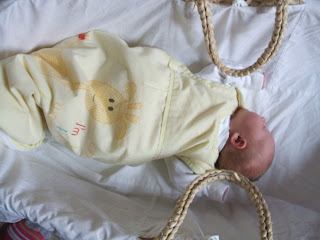 Sandy is still on paternity leave and will be next week too, although he will probably work from home a little so that he can meet a few deadlines and so that he can take a day or so off Grandma and Granddad Brownlee come down in a few week's time.  We have had some lovely family time just taking walks into town or even just bathing Naomi in the evenings.  We also had a lovely day when we went to register Naomi, she is now a real person, although we need to wait for the certificate to come in the post, a complication that I don't really understand about her being born in Leicester City but us registering her in Loughborough.

We have had a steady flow of visitors, with folks from church coming to say hello and also to bring us meals.  Open Heaven make sure that new families are brought an evening meal every day for 2 weeks after the birth, this has been a HUGE blessing to us and we are loving everybody's ingenious efforts at dealing with my food peculiarities!!  Today we also had a visit from our good friend Liz Lynch from Aberdeen.  Coincidence meant she was in Leeds visiting other friends and it was lovely that she made the effort to come all the way over to Loughborough to meet Naomi and see us, we did need to check her pockets on the way out to make sure our daughter wasn't stolen though! There is so much more that could be said, but for now I will sign off, however I will share with you the first ever picture of Naomi, Mum and Dad together. 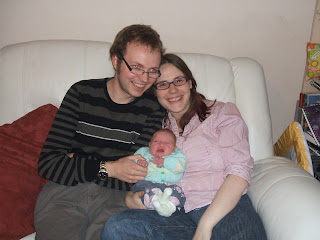