So I've been on a little work-related jaunt, my first trip away from home since Miriam was born. This was just for two days so not as bad as it might have been, and although tired Jay has done a great job of managing the two little girls. I did miss them very much though.

The trip was to Newcastle-upon-Tyne (naturally I was keeping my Mackem family credentials on the down-low during this exercise), for an away-pair-of-days related to the project I'm now working on, SECURE. It's a joint venture between four universities looking at different aspects of sustainability in cities, and the point of this trip was to let the different groups share what they've been up to and work out how we join it all together. My job on the project (funded for about nine months or so) is looking at optimisation, an example being along the lines of "if you're a council and have £10m to spend on home improvements, what's the best way to spread it across the houses in a city to save most energy". Quite an interesting computing problem as there are potentially tens of thousands of variables, and genetic algorithms normally get applied to problems with up to a few hundred.

On to some details of the trip. I stayed in room 1101, which for some reason is my favourite binary number. (what do you mean, "you don't have one"?) 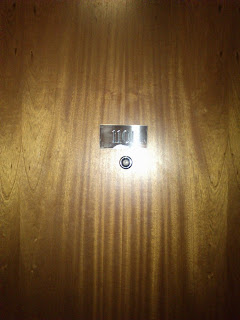 I felt a little bit like I was about to go into Bender's apartment, but no robots were to be seen. The hotel was deceptive - I was on the eleventh floor, but have come from the outside, I initially thought this meant sleeping on the roof... 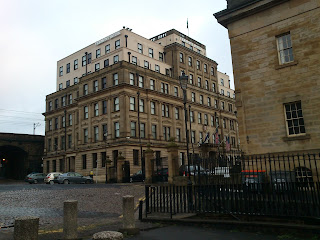 It turns out that the main entrance is on the sixth floor. Newcastle is one of those cities which has streets on multiple levels all intertwined. I quite like that.

The hotel was quite close to the centre, and had quite good views out of the front... 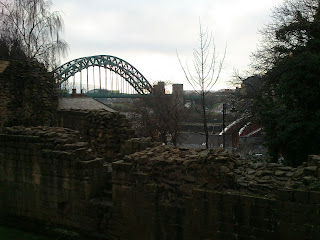 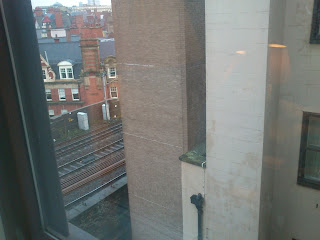 That's the East Coast mainline on the left. Good thing I like trains!

All in all quite an enjoyable (and dare I say productive?) trip, but I'm glad to be back. It's only been two days and Naomi in particular seems to have grown up by a good couple of months! So many new words in such a short time.